The stadium in Dharamsala already has a capacity of 20,000.

Dharamsala: Dharamsala has been allotted 10 World T20 matches and considering that the organisers have decided to raise the seating capacity of the stadium by 25 percent. “5,000 more seats shall be added to the present 20,000,” HPCA spokesperson Sanjay Sharma told PTI on Saturday. Sharma said that 30 new rooms with 5 star facilities shall also be added to the Pavilion Hotel to accommodate more international players. Pavilion was constructed earlier by HPCA for the comfortable stay of the players and it already has around 100 rooms. He said the HPCA have already started the construction work. “To make entry of the ticket holders more fool proof turnstile system shall be adopted this time,” said Sharma. READ: ICC World T20 2016: Hosting 10 matches in Dharamsala proud moment for Himachal Pradesh, says HPCA official

He said that the HPCA will approach Himachal Government for all possible help in the successful organisation of these matches in the state, which shall defiantly increase the tourism many fold because the live telecast will be seen by majority of sports lovers throughout the world. Host India will meet its traditional rival Pakistan on March 19. Besides this high voltage thriller, arch rivals Australia and New Zealand will lock horns a day before. READ: ICC World T20 2016 trophy to embark on global tour

Dharamsala will also host two Women’s World T20 matches on March 22 and March 24. Six qualifier matches including three of Bangladesh. World T20 2016 will be staged across eight venues in India from March 8 to April 3.

Dharamsala all set to host 10 World T20 matches next year, a HPCA official said on Saturday that it is a proud moment for the state. “It’s a moment of pride and honour that our small state and the HPCA have been allotted eight men’s matches and two women’s in the upcoming T20 World Cup making Dharamsala one of the biggest and most sought after venues in India,” HPCA press secretary Mohit Sood told reporters. READ: Virat Kohli: IPL has taken home advantage away from India 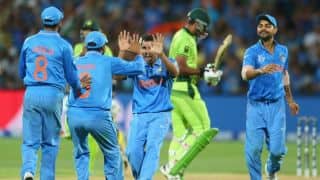