Adil Rashid said that he and Moeen Ali make it a point to encourage each other.

Mumbai: England leg-spinner Adil Rashid on Saturday said he and team-mate off-spinner Moeen Ali encourage each other and can turn out to be a good spin bowling pair in days to come. England produced an impressive all-round performance to outclass New Zealand by six wickets in their warm-up match ahead of the ICC World Twenty20 2016 cricket tournament at the Wankhede Stadium on Saturday. “Moeen and I encourage each other very well. I hope we two can grow as spinners and be a good bowling pair soon,” Rashid said at the post-match press conference here. LIVE CRICKET SCORECARD: New Zealand vs England, ICC World T20 2016, Match 11 at Mumbai

Batting first, skipper Kane Williamson struck a quick fire half-century as New Zealand posted 169 for 8 in 20 overs. Rashid (3-15) was the pick of the England bowlers.

In reply, openers Jason Roy (55) and Alex Hales (44) used their skills to good effect as England chased down the total with ease, scoring 170/4 in 19.2 overs. The 28-year-old said that the win was much needed and the team looks balanced.

“It was a good workout. We will aim to win all matches. These are different conditions. Today we also batted well, Jason was good with the bat, he is an explosive batsman,” Rashid said. On the other hand, Kiwi spinner Mitchell Santner (2 for 24), who starred with the ball, pointed out that a score of 170 could have been good for them.

“England played very well. I think 170 could have been good for us. England is known to play aggressive brand of cricket,” Santner said at the post-match press conference here. 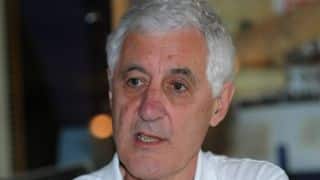