Pakistan locked horns with Sri Lanka in ICC World T20 2016 warm-up match at Eden Gardens, Kolkata. Shahid Afridi won the toss and elected to bat first. As Pakistan’s first game with Bengal XI was called off, they wanted to get the most out it and get their combinations right. Pakistan had put up 157 runs on the board, thanks to Mohammad Hafeez’s unbeaten 49-ball 70. Pakistan had scored only 100 runs off 15 overs. They needed someone to take the attack to the opposition and scale up the run-rate. Akmal went on a rampage and hit a maximum off the last ball of the 17 over. Hafeez reached his fifty with a boundary and plundered 17 runs off the 18th over. Akmal got out to Perere on 14 while going for a big one. Shahid Afridi soon joined joined Akmal in the dug out, as he was dismissed for a 2-ball duck. Hafeez made sure he keeps the strike in the last over as he smacked a four off Kulasekara. However, Kulasekara ensured he doesn’t let the Pakistani batsmen free their arms and conceded only four singles off the last 4 balls. Sri Lanka needed 158 runs off 20 overs. Rangana Herath was the pick of the bowlers for Sri Lanka: 4-0-24-1. Live cricket scorecard: Pakistan beat Sri Lanka by 15 runs in warm-up match

Sri Lanka did not start the chase on a good note, as Tilakaratne Dilshan on a duck was dismissed in the second. However, there was no holding Chandimal back, as they plundered five 4s and a 6 in 2 overs, before he was dismissed by Imad Wasim on 31. After the end of the batting Powerplay, Sri Lanka were 41 for 2. Captain Shahid Afridi brought himself into the attack to scalp more wickets but was smashed for 14 runs in the 7th over by Lahiru Thiriamanne. Sri Lanka needed 74 off the last 10 overs. Wasim sent Kapugedera and Thirimanne back to the dug, putting Sri Lanka on the back foot. The onus was on Perere and Siriwardana to stitch a crucial partnership to take their team over the line. But Mohammad Irfan dismissed both the batsmen in the same over. Sri Lanka were 110 for 7, losing control over the chase. Live cricket blog: SL 157/5 in overs 20, Live Cricket Score, Pakistan vs Sri Lanka, T20 World Cup 2016, PAK vs SL, warm-up match at Eden Gardens, Kolkata: Pakistan win by 15 runs

Afridi was the only Pakistan bowler who went for plenty: 4-0-40-0. However, Pakistan kept taking wickets at regular intervals. Sri Lanka needed 25 runs off the last over, with 2 wickets in hands. Wahab Riaz bowled the 20th over and conceded 10 runs off it. Nonetheless, Sri Lanka fell short by 15 runs. Sri Lanka were in total control of the chase until Thirimanne batted. Like the warm-up against New Zealand at Wankhede, the Sri Lankan batsmen failed to make an impact. 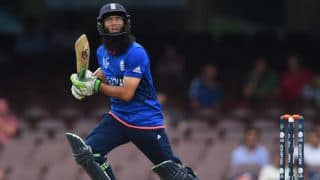