Sources have revealed that Lendl Simmons will either come as a back-up option for Andre Fletcher or would replace him.

West Indies batsman Lendl Simmons is likely to replace Andre Fletcher in the second semi-final of T20 World Cup 2016. The match is scheduled for Thursday and will be played between India and West Indies. Some sources have revealed that Simmons will either come as a back-up option for Injured Fletcher or would replace him. Fletcher sustained a hamstring injury when he was batting during West Indies vs Afghanistan match. Fletcher’s injury is a cause of worry for the West Indies but they will be hoping that Lendl Simmons fills in his shoes perfectly. It is felt that Simmons is an ideal replacement. Full Scorecard: India vs West Indies, 2nd Semi-Final match, T20 World Cup 2016

In a report published on Cricbuzz.com, it is said that the replacement has come at an opportune time. West Indies are already plagued by injuries to Kieron Pollard and Darren Bravo. West Indies had changed their strategy to fill in the gap created by the absence of Pollard and Bravo. They are now using their services in the middle-order. Simmons has played for Mumbai Indians in Indian Premier League (IPL) and hence knows a bit of Wankhede Stadium. West Indies fans will be hoping that his experience of having played at the ground before will help the team to some extent. ALSO READ: Lendl Simmons out of ICC World T20 2016 with injury; West Indies’ absentee list continues to grow

Simmons has represented West Indies in 34 Twenty20 internationals (T20Is) scoring 761 runs at an average of 25.37 and a strike rate of 113.75. He has hit four fifties. His T20I record is slightly better than Fletcher, who has 533 runs from 27 appearances in T20Is. He averages 23.17 and his strike rate is 113.16. Meanwhile, West Indies team’s media manager said on the sidelines of a practice session at the Brabourne stadium in Mumbai, “Simmons will join the squad and Andre Fletcher has gone back home.” 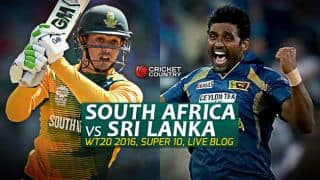