International Cricket Council on Monday announced that warm-up matches ahead of the World T20 in India will be played as double-headers.

Dubai: International Cricket Council  on Monday announced that warm-up matches ahead of the World T20 in India will be played as double-headers at the IS Bindra Stadium in Mohali, which starts from March 4.The warm-up matches were originally scheduled to be held at Sector 16 Stadium in Chandigarh. The updated Mohali warm-up schedule is as follows: March 4 – Netherlands vs Afghanistan (3 p.m), Scotland vs Oman (7.30 p.m). March 6 – Scotland v Netherlands, (3 p.m), Oman vs Afghanistan (7.30 p.m). ALSO READ: ICC World Cup 2016: Warm-up matches schedule

The warm-up match, which was originally slated to take place on March 5 between Hong Kong and Bangladesh, will now feature Hong Kong against a local side. The teams who will be playing in the first round — the qualification round of the ICC World T20 2016 — will be having their warm-up matches from March 3-6, 2016, in Dharamsala and Mohali.

The Indian cricket team will play warm-up matches in their build-up to the ICC World T20 2016 at Kolkata and Mumbai. India will be facing South Africa in Mumbai and the West Indies in Kolkata, on March 10 and 12 respectively.

Teams featuring in the second round will play warm-up matches in Kolkata and Mumbai from March 10 to March 15. 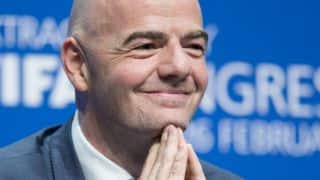