Anamul Haque injured himself while fielding against Scotland.

Imrul Kayes is set to replace Anamul Haque subject to approval from International Cricket Council (ICC) in the ongoing ICC Cricket World Cup 2015. Imrul is scheduled to reach Adelaide on Friday, on the same day the Bangladesh team is scheduled to leave Nelson to reach Adelaide ahead of their game against England.  ICC Cricket World Cup 2015: POINTS TABLE

Imrul played four games for Victoria Sporting Club in the Dhaka Premier Division, where he averaged around 36, but his First-Class career has really blossomed of late, where he smashed two centuries in six matches at an average over 64. He recently played in the Khulna Division, when he had to rush back to Mirpur for his flight, reports ESPNcricinfo. Top 10 bowlers in the ICC Cricket World Cup 2015.

Anamul injured himself while fielding against Scotland, when he stopped on the boundary. He immediately called for help and was rushed to the local hospital for scans. After the match the team’s physiotherapist said that Anamul’s condition was closely monitored and was diagnosed with grade three joint strain. The team is yet to decide whether to carry his treatment on in Nelson or Hamilton, which will host Bangladesh’s final game of the group stages on March 13. Top 10 batsmen in ICC Cricket World Cup 2015

Anamul has not manged to be a huge success with the bat so far in the tournament, but was extremely active on the field in Nelson, where he unfortunately picked up this injury. Bangladesh captain Mushrafe Mortaza too pull a calf muscle during his side’s emphatic win over Scotland. He did not finish his quota of 10 overs and was seen in some discomfort on the field. Top 10 fielders in the ICC Cricket World Cup 2015 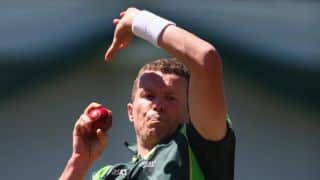 Peter Siddle signs on for Lancashire for 2015 County Championship