A selection of the top pictures from the second day's play of the 3rd Test between England and India being underway at Trent Bridge.

India added 22 runs to their overnight total before being bowled out for 329 on the second morning of the 3rd Test against England at Trent Bridge. Debutant Rishabh Pant was the first to depart before the last three batsmen fell for the addition of six runs. Broad and Anderson cleaned up the tail and then England openers left behind a nervy start to lead a 54-run stand. Indian seamers, led by Hardik Pandya, then ran through the English batting order to take 168-run lead.

Due to a light drizzling in the morning, the pitch was kept under the covers. And the play started after a delay of 30 minutes under an overcast sky. (Getty Images)

India lost overnight batsman Rishabh Pant to Stuart Broad after the addition of 16 runs. The 20-year-old debutant dragged one back onto the stumps to be bowled on 24. (Getty Images)

England wrapped up the Indian innings in quick time. The trio of Stuart Broad, James Anderson and Chris Woakes finished with three wickets apiece. India were bowled out within the first hour of play on 329 (Getty Images)

England saw through the session safely, going to lunch with 46/0 in 9 overs (Getty Images)

England swiftly reached 54/0 but then Ishant Sharma and Jasprit Bumrah struck in quick succession. Ishant had Cook out caught behind for 29 and then Bumrah removed Keaton Jennings on 20. (Getty Images)

England captain Joe Root scored 16 before being dismissed. KL Rahul at second slip claimed a low catch off Hardik Pandya which was referred to the TV umpire. He adjudged that as out with the ball seemingly bouncing on his fingers. Root made no secret of his disappointment at the decision (Getty Images)

The allrounder took his maiden five-wicket haul in Test cricket, finishing with figures of 5/28 from six overs (Getty Images)

Jos Buttler was fast running out of partners so he adopted an aggressive approach to hit 39 off 32 deliveries before being dismissed as the last batsman. From 54/0, England crashed to 161-all out (Getty Images)

Indian openers were in ODI mood when they came out to bat after tea, racing to 59 runs in just 11 overs (Getty Images)

Shikhar Dhawan continued and survived a drop chance. He looked all set to register his first fifty of the tour when on 44, he danced down the track to be stumped off Adil Rashid (Getty Images)

Meanwhile, Cheteshwar Pujara looked on a mission to get rid of his image of a slow batsman. He raced to 22 off 18 with five fours before returning to his natural game (Getty Images)

India capped off a dominating day, scoring 124/2 in 31 overs – exactly at the rate of 4 runs per over. They extended their lead to 292 runs with Pujara (33*) and captain Virat Kohli (8*) still batting (Getty Images) 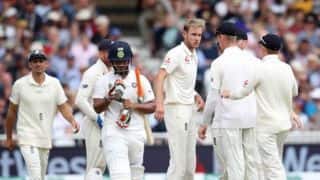