The confirmation of the important appointment will come shortly.

The infamous ball-tampering scandal that unfolded in the Cape Town Test in March last year caught Cricket Australia in a state a turmoil. Besides the on-field suspensions that resulted in Steve Smith and David Warner handed 12-month suspensions, while Cameron Bancroft banned for nine months, the scandal set in motion a turbulent few months in Cricket Australia.

According to a report in the Sydney Morning Herald, the confirmation of the important appointment will come shortly. (ALSO READ: FULL TEXT: Cricket Australia statement on Gabba floodlight failure during BBL game)

Grant has worked with Holden Special Vehicles, Lexus Australia and Toyota Australia has strong links to cricket having been president of Bankstown District Cricket Club since 2005, the same club as Roberts.

During the Brisbane Test, Roberts had said that the appointment of a COO was close. Next appointment on the cards will be Pat Howard s replacement. “We aren’t looking necessarily for a former player or another coach,” Roberts told SEN Radio. “We’ve got a coach in Justin Langer for the men’s team and a coach in Matthew Mott in the women’s team. (ALSO READ: Australian selectors available for communication, vouches Marnus Labuschagne)

“What we need is the best possible person to lead the national performance system. It’s easy to get caught up in a bit of mystique around these roles but at the end of the day it’s about developing teams in the short term and long term.”

Former Australia captain Belinda Clark is holding the position in the interim. 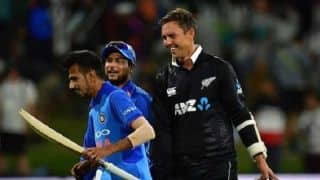 India vs New Zealand 2019, 3rd ODI, LIVE streaming: Teams, time in IST and where to watch on TV and online in India