Team India signed off from the T20 World Cup on a winning note after restricting Namibia to 132 in their final Super 12 match in Dubai on Monday.

Dubai: Captain-in waiting Rohit Sharma made short work of a modest target with an elegant half-century after spinners reigned supreme as India on Virat Kohli’s last day as shortest format captain ended their T20 World Cup campaign with an emphatic nine-wicket victory over Namibia at the Dubai International Stadium on Monday. Rohit, who is set to take over as India’s white-ball captain, smashed 56 off 37 balls with seven fours and two sixes and got fabulous support from another supremely stylish KL Rahul (54 not out off 36 balls) as India chased down the target of 133 in only 15.2 overs. (MATCH HIGHLIGHTS)

It was nothing more than a stroll in the park for the Indians, who basically caught the Namibians by the scruff of their necks with spinners Ravindra Jadeja and Ravichandran Ashwin, snaring six wickets between them. Then, Rohit dazzled and Rahul sizzled with some breathtaking pick-up pull shots while Suryakumar Yadav (25 not out off 19 balls) showed his 360 degree hitting skills to end a rather disappointing tournament on a sweet note. But three comprehensive wins against smaller nations came only after the horse had bolted the door. (SCORECARD)

The last three games were flawless but it was two matches too late, something that will certainly haunt Kohli, whose white-ball captaincy tenure is set to end with no ICC trophy to show for his efforts.

On the night, India’s spinners were just too good for the unheralded Namibia batters as India restricted the minnows to a modest 132 for 8 in their inconsequential final T20 World Cup match.

Already ousted from the tournament after losing to Pakistan and New Zealand in their first two games, India looked relaxed and the Namibians were all at sea as they are not used to playing world-class slow bowling operators of this calibre.

.@imVkohli signs off as the #TeamIndia T20I captain with a win. 🙌 🙌#T20WorldCup #INDvNAM pic.twitter.com/0YBK69rFhn

Jadeja (3/16) and Ashwin (3/20) took six wickets between them for 36 runs to make it a lop-sided contest after Namibia, courtesy their opener Stephan Baard (21) and Michael van Lingen (14), had added 30-plus runs in the first four overs.

Once Van Lingen was dismissed by a short ball and extra pace from Jasprit Bumrah (4-0-19-2), the will to fight was not evident on the African nation’s batters when Jadeja and Ashwin jointly operated. Mohammed Shami (0/39 in 4 overs) was the only bowler who had an off-day.

Jadeja saw Craig Williams jumping down the track and stopped on his tracks and pitched on length to get enough away turn. Williams missed it and stood mid-pitch looking completely bamboozled. Baard was out to a typical Jadeja arm ball, which he tried to sweep and was caught plumb in-front.

Once Jadeja got a couple of wickets, it was Ashwin’s turn to get into action as he removed Jan Nicol Loftie-Eaton (5), inducing a cut, a shot that landed into slip fielder Rohit Sharma’s palms and then bowled one with the angle that cleaned up Zane Green (0). In between, he also removed rival skipper Gerhard Erasmus (12).

But the highlight of India’s fielding effort was a superb diving catch by Rohit at short cover when he had roughly 0.16 seconds reaction time to pluck the ball inches above the ground to dismiss JJ Smit (9).

Namibia’s plight was understandable as they hit only eight fours and two sixes in the entire innings while consuming 58 dot balls. 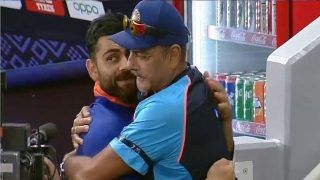