India went for runs early on Day Three and were bowled out for a score of 180 runs in the tour game against SL BP XI.

India head into lunch on the third and final day of the tour game between India and Sri Lanka Board President XI which started on August 6, 2015. India had a lead of 342 runs at stumps on Day Two, they had lost wickets early on the second day but their bowlers came out firing and churned out a lead of 230 runs. India had opened with Virat Kohli and Rohit Sharma and boh failed as India were reduced to 28 for three late on the second day. KL Rahul then top scored with 47 to take India past 100 along with Pujara. Both retired earlier on the third day and India were eventually bowled out for a score of 180 runs setting the hosts a target of 411 runs. The hosts lost the wicket of de Silva as Rahul took a stunner as the hosts finished with 14 for one after 5 overs. Live cricket updates: India vs Sri Lanka Board President XI, Day 3, Colombo

Sri Lanka Board President XI were in trouble on the second day when they came up against a rampant Ishant Sharma who took five wickets in space of 21 balls for just four runs to reduce the hosts to 10 for five at one point of time. Varun Aaron then took a couple of wickets to give India firm control. The pair of Danushka Gunathilaka  and Nirsoshan Dickwella threatened to take the game away but the Indian spinners did the job to bowl them out for a score of 121; handing India a lead of 230 runs. Read:Ishant Sharma takes 5 wickets in 21 balls against Sri Lanka Board President XI

Earlier, India lost wickets in a flurry earlier in the day, with Kasun Rajitha taking five for . India will be happy with their work though on a greenish deck. It was the 134-run stand between Ajinkya Rahane and Cheteshwar Pujara that steadied India after the middle order had collapsed. Shikhar Dhawan and KL Rahul gave India an ideal start, adding 108 runs before the Rajitha struck India.Read: India 314/6 at stumps, Rahane scores hundred, Kohli flops on Day 1 India vs Sri Lanka President XI, India tour of Sri Lanka 2015

Dwayne Bravo shares excerpts of his next song 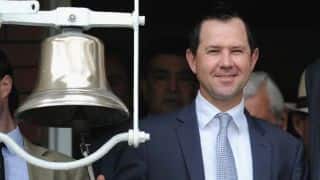 Ricky Ponting: 8 cricketers from Australian squad may not play Tests after Ashes 2015