Gurinder Sandhu admitted that he wants to be recognised as a pacer and not spinner.

Australia A cricketer Gurinder Sandhu, who impressed with an all-round performance during the two unofficial Tests they played against India A at Chennai, is the talking topic at present. The visitors’ captain Usman Khawaja joked that Sandhu could open the innings if Cameron Bancroft left for the Ashes. The Indian-origin bowler showed his multi-talent in the series when he only bowled at 140kmp but also troubled the Indian with his slow bowling skills that even fetched him six wickets out off the 10 he claimed in both the matches. READ: Usman Khawaja reckons any change in Australian team will be harmful

According to a report from Times of India, Khawaja said that “Sandhu can really do anything”, while the latter sat beside his skipper laughing listening to the praises. Although the New South Wales born snapped most of his wickets with his off-spin, he suggested that he wanted to be recognised as a pacer. “I might bowl off-spin if the conditions are conducive or if the captain needs me to try something different when the opposition has built a big partnership. But my focus is to bowl fast and I want to be known as a genuine pacer.

“I hardly bowl off-spin back in Australia. I have been working with our spin bowling coach John Davison at the National Cricket Centre in Brisbane for the last 15 months,” Sandhu added. READ–Australia A’s win over India A ‘huge’: Usman Khawaja 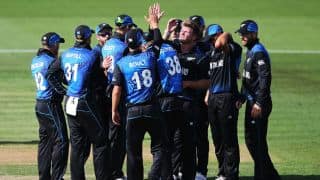