Pacers Mohammed Siraj (3/56), Navdeep Saini (2/47) and Rajneesh Gurbani (2/47) shared seven wickets between them, while leg-spinner Yuzvendra Chahal picked up one

South Africa ‘A’ wicketkeeper Rudi Second missed a century by six runs as India ‘A’ bowlers produced a disciplined performance to restrict the visitors to 246 for eight in the first ‘unofficial’ Test here. Pacers Mohammed Siraj (3/56), Navdeep Saini (2/47) and Rajneesh Gurbani (2/47) shared seven wickets between them, while leg-spinner Yuzvendra Chahal picked up one as India kept a tight leash on the South Africans, who opted to bat after winning the toss.

Except for Second (94) and Sarel Erwee (47), none of the other South Africans could make a significant contribution. Coming out at the fall of Erwee with his team tottering at 93 for four, Second held the South Africa ‘A’ innings together before he was the last man out on the first day of the four-day game. He hit 12 boundaries in his 139-ball innings. Second stitched 59 runs with Senuran Muthusamy for the fifth wicket to resurrect the South Africa ‘A’ innings before a 39-run stand with Shaun von Berg helped his side near the 250-run mark.

Siraj rocked the South Africa ‘A’ innings early with a two-wicket burst in the space of two overs. He first removed opener Pieter Malan (7) in the fifth over before claiming the wicket of Zubayr Hamza (0) in the seventh over. After that, there was a 50-run stand between Erwee and captain Khaya Zondo (24) for the third wicket. Saini ended that partnership by sending Zondo to the pavillion. Another wicket fell as South Africa ‘A’ were reduced to 93 for four before Second took charge. 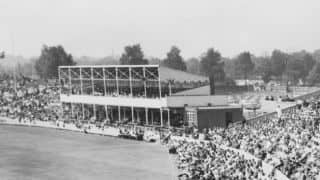 West Indies vs Bangladesh 2018, 2nd T20I LIVE Streaming: Teams, Time in IST and where to watch on TV and Online in India