STUMPS – Priyank Panchal and  Abhimanyu Easwaran open the innings for India A and that’s stumps at 14/0. India A lead South Africa A 31 runs.

ALL OUT – South Africa A all out for 400. Wiann Mulder remains unbeaten on 131. 4 wickets for Kuldeep Yadav, three for Shahbaz Nadeem, two for Mohammad Siraj and one for Shivam Dube.

WICKET – Aiden Markram  departs for 161. Cleaned up by Mohammad Siraj.

250 – No success so far for India A bowlerson Day 3 as Aiden Markram and  Wiaan Mulder are making hay at Mysuru. South Africa A are 250/5 in reply to India A’s 417. Markram, the skipper, is leading from the front and is batting on 140 off 217 balls while young Mulder is nearing his half-century. He is on 42 off 118 balls. Their partnership

Hello and welcome to our live coverage of day three of the 2nd unofficial Test between India A and South Africa A at Srikantadatta Narasimha Raja Wadeyar Ground, Mysore on Thursday.

Spinners struck late to give India A the upper hand as South Africa A slumped to 159 for five in their first innings at stumps on Day 2 of the second unofficial Test on Wednesday. Resuming at 233 for 3, India A were dismissed for 417 with captain Wriddhiman Saha (60) and Mumbai allrounder Shivam Dube (68) joining Shubman Gill (92) and Karun Nair (78) as those to hit half-centuries.

The highly-rated Markram, tipped as a future leader, showed his class and in the company of Theunis de Bruyn (41, 54 balls, 5x4s, 1×6) added 82 runs for the second wicket, during which they negotiated the India A attack rather comfortably. Nadeem got the breakthrough, castling de Bruyn, a reward for his consistency. Khaya Zondo lasted just 12 balls, before being dismissed by Nadeem for five.

Kuldeep, who is part of the India Test squad for the South Africa series beginning in October, kept the rival batsmen guessing and dismissed Senuran Muthusamy (12) and Heinrich Klaasen (2) in the space of six runs to leave the visitors in trouble. South Africa A ended the day at 159 for five, still trailing their opponents by 258 runs. 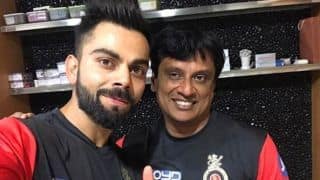 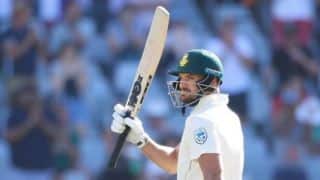