KSCA Spokesperson Vinay Mruthanjaya said local grounds men could not prepare the pitch due to incessant weather in Belagaum.

The first four-day match between India A and South Africa A has been shifted to Bengaluru from Belagaum due to inclement weather forecast. “The match, which was scheduled to be played at Belgaum next week, has been shifted to Bengaluru due to expected inclement weather conditions,” KSCA Spokesperson Vinay Mruthanjaya told PTI here. The first of the two games was scheduled to be played in Belgaum from August 4 to 7 followed by the second one in Bengaluru (August 10-13). But now both the matches will be held here.

Mruthunjaya said local grounds men could not prepare the pitch due to incessant weather in Belagaum, forcing BCCI to shift the series opener. “The groundsmen escalated the matter to higher KSCA authorities, who took up the matter with BCCI officials,” he said. 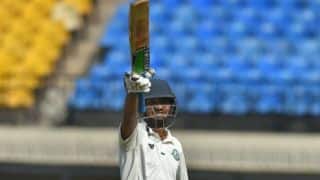