The suspense over Kedar Jadhav's injury seems to have been lifted after reports emerged of the India batsman being declared fit for the upcoming ICC World Cup 2019 in England.

The suspense over Kedar Jadhav‘s injury seems to have been lifted after reports emerged of the India batsman being declared fit for the upcoming ICC World Cup 2019 in England.

Jadhav gave India a might injury scare after hurting his shoulder during the recently concluded Indian Premier League. He picked up the injury during Chennai Super Kings‘ final league stage fixture and was subsequently ruled out of the IPL playoffs.

“Kedar’s injury was not a serious one and he has fully recovered now. All 15 players who were picked in the squad are travelling to UK,” a team source told PTI.

As per a report in The Times of India, Jadhav’s recovery was overseen by Indian team’s physio Patrick Farhart who, in his report to BCCI, has declared him fit to fly with the World cup squad.

Apart from adding steel through his batting in the middle-order, the 34-year-old offers a decent option for India in the bowling department with his part-time offspin.

The Virat Kohli-led India will leave for England on the morning of May 22 and could skip the two warm-up matches against New Zealand (May 25) and Bangladesh (May 28) as a precautionary measure.

The two-time champions will start their bid for a third title when they square off against South Africa on June 5 at The Rose Bowl, Southampton.

The final of the showpiece event is slated for July 14 at Lord’s. 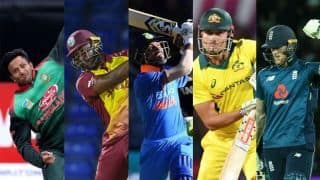 TK vs ETS, Match 9, T20 Mumbai, LIVE streaming: Teams, time in IST and where to watch on TV and online in India