India's cricketers wore jerseys with their names and numbers during the three-day practice match against WI Board President XI.

As part of the inaugural ICC World Test Championship, India cricketers will wear Test jerseys with names and number printed when they take on West Indies in the first of the two Tests in Antigua starting Thursday.

The new jerseys were first sported by England and Australia, who kickstarted the World Test Championship with the first Ashes Test. Last week, New Zealand and Sri Lanka began their campaign and it is now turn for India, the No. 1 Test team in the world, to begin theirs which culminates at Lord’s in 2021.

India’s cricketers wore white jerseys with their names and numbers during the three-day practice match against West Indies’ Board President XI and on Tuesday, the Indian Cricket team, on its Instagram, posted photo stories of players sporting their bran new white Test jerseys.

Leading the pack was captain Virat Kohli, sporting his name the number 18 jersey on the back and as did the rest of the squad members.

After winding up the T20I series 3-0 and sealing the ODIs 2-0, India move on to play Test cricket for the first time in eight months since beating Australia on their home soil to win the 2018-19 Border-Gavaskar Trophy. They began their preparations with the tour game which ended in a draw but not without offering good warm-ups to Cheteshwar Pujara, Rohit Sharma and Umesh Yadav.

India have won nine out of the last 14 Test matches and with two more high-profile Tests with a strong following starting Thursday, Kohli will eye a winning start as India take their first step towards Lord’s 2021, where the final of the World Test Championship will be played. 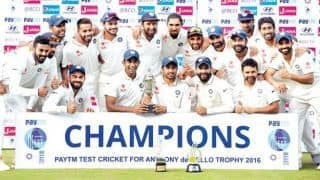