India defeated defending champions Pakistan to win the 4th Cricket World Cup for the Blind. In reply to Pakistan’s 389, India scored 392 with two balls to spare.

Except for their initial match against Pakistan, India won all games in the league, in which other participating countries were Sri Lanka, Australia, Bangladesh and England and hosts South Africa.

Pakistan beat England in the semi-finals, while India ousted Sri Lanka. South Africa won the inaugural edition of the Blind Cricket World Cup in 1998, but the game has been in decline since then due to a lack of support from most national cricketing authorities, a fact lamented by Indian captain Shekar Naik as well.

Naik said the team was elated at having won despite the great odds and lack of support from the Board of Control for Cricket in India (BCCI).

“Despite India being the richest cricketing country in the world and even managing the ICC, the BCCI still does not support blind cricketers,” Naik said.

“PCB do not have much money, yet they are still encouraging their blind cricketers, even giving them a monthly salary,” Naik added.

“We would do much better if we had that kind of support. The contribution from the Indian Sports Ministry of 25 lakh made it possible for us to come to South Africa and win, so I hope that we will get better recognition now.”

The Indian team comprised 17 players and three officials. The number of visually challenged cricketers in India is 22,000, far more compared to the 4,000 in Pakistan and only 200 in South Africa.

The winners of the Blind Cricket World Cup 2014 pic.twitter.com/bOnbTiK0d5

The President of Blind Cricket South Africa, Francois Neethling, described the tournament as a great success, adding that players learnt a lot from each other as they brought in new techniques to show their colleagues from other countries how the game can be improved. 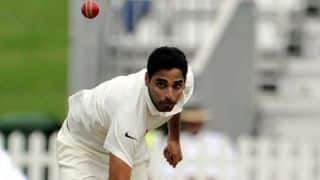 Bhuvneshwar Kumar to miss 1st Test against Australia due to injury