New Zealand are at 24 for one at stumps on Day Two of the second Test against India.

India produced a solid display against New Zealand on Day Two of the second Test in Wellington on February 15, 2014. They have a lead of 222 runs at stumps. New Zealand are at 24 for one with Hamish Rutherford batting on 18 and Kane Williamson on four.

Peter Fulton was the only wicket to fall for the Kiwis in their second innings on Day Two for one. He offered no shot to an in-swinging delivery from Zaheer Khan that clipped the top of the front pad. He was out leg-before.

Rutherford and Williamson then guided New Zealand till the close of play. The task looks daunting for New Zealand as there are still three more days left in the Test match. They do, however, lead the series 1-0.

Earlier in the session, India were bowled out for 438 in their first innings. Ajinkya Rahane top-scored with 118 off 158 deliveries. MS Dhoni scored 68 of 86 deliveries. Zaheer added a quick-fire 22 off 19 deliveries.

The post-tea session began with India at 301 for six. Rahane began on 64 and Dhoni on 39. Dhoni pushed one from Trent Boult to deep backward-point for two runs to get things started in the session on Day Two. Then Rahane drove a half-volley from Boult in-between cover and mid-off for a four.

Dhoni was in great form as he played the upper-cut twice to Tim Southee and got fours towards third-man. Rahane then played two brilliant cover drives in-a-row off Boult and got two fours.

James Neesham bowled a half-volley and Dhoni clobbered that back over the bowler’s head for a four towards long-on. Boult then bowled a back of a length delivery outside off-stump and Rahane played a lat cut as the ball raced away for a four through third-man.

Dhoni was eventually dismissed for 68 off 86 deliveries. Boult bowled a bouncer down the leg side and Dhoni tried to flick it away towards fine-leg. But he only managed to glove it to wicketkeeper BJ Watling. This was Dhoni’s 29th half-century in Test cricket. The duo had added 120 runs off 145 deliveries.

Ravindra Jadeja was the new man in and he got off the mark with a flick towards fine-leg for a four. He didn’t stop there as he scored a few fours. He struck fours down the ground and through third-man.

Neil Wagner then found the outside edge of Jadeja’s bat and Fulton took a splendid catch at second slip. While on his way celebrating the dismissal, Wagner expressed his jubilation in front of Jadeja, who was not too happy about it.

Rahane then got to his maiden century in Test cricket with a four towards mid-wicket. He then played some brilliant shots which fetched him fours. Rahane then lofted one from Tim Southee towards deep cover, but did not get enough distance on it.

Boult ran in from deep point and took a stunning one-handed catch on the dive. Rahane hit 17 fours and a six over deep square-leg. Zaheer edged one from Wagner to Watling. Zaheer struck four fours in his innings. He was the last wicket to fall for India.

Boult, Southee and Wagner took three wickets each. Watling took five catches behind the wickets. India led by 246 runs at the innings break. 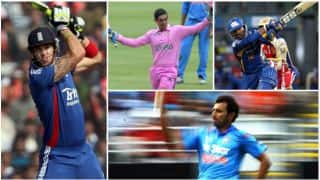