Ravichandran Ashwin is pleased over India starting the season with a victory against New Zealand in the first cricket Test and hopes the team would continue to perform in the same vein. 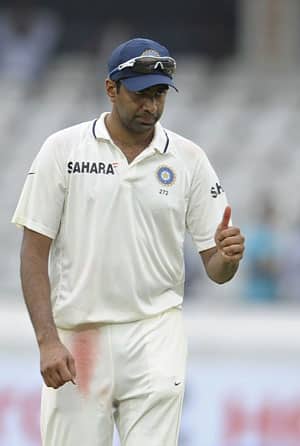 Ravichandran Ashwin is pleased over India starting the season with a victory against New Zealand in the first cricket Test and hopes the team would continue to perform in the same vein.

Ashwin, who was Man-of-the-Match for his 12 for 85, noted that the team had a tough last year.

“As a whole the team had a tough year but it happens with every team. We have put that behind. We are starting on a good note, hoping to continue and have a great season,” he said after India defeated New Zealand by an innings and 115 runs in Hyderabad on Sunday.

He said he was happy to have the best figures by any Indian bowler against the Kiwis.

“I don’t get too bogged down with individual performances even if it is great or even if it is bad. It’s a good start. The pressure is off my bag. I can enjoy myself and just let the ball do the talking, just look at various things that I have to be working on constantly.”

The off-spinner pointed out that when New Zealand toured India last time they batted well and almost drew the series. “As this is not a venue where we won the last time so we came with a lot of apprehensions but at the end of the day I think we did very well as a unit to win the test match in four days.”

Ashwin believes the contest in the second test at Bangalore would be stiffer as the Kiwi batsmen would come up with better plans.

He said the wicket at Hyderabad was very good. “I enjoyed the wicket a lot. There was enough in it for the bowlers and it was a very good batting wicket as well,” he added.

He said Indian bowlers stuck to their basics when McCullum and Williamson were batting.

“We realised that we had to stick to our basics. We have to take one wicket at a time. When two batsmen are going good, it becomes tough for bowlers to dislodge them. You have to be patient. Once that one or two wickets fall it becomes much more easier because the new batsman has to move his feet around, put his technique in place. You can be really attacking at that point of time,” he said as New Zealand were bowled out for 164 in the second innings from 98 for one.

“It happened in first class match of my career. I don’t remember after that,” he said when asked about New Zealand captain’s dismissal in second innings. Taylor was clean bowled when he left a ball which spun in and uprooted the bails. (IANS)