India will have to play well in the first innings of the second Test, says John Wright.

Former coach John Wright feels that a lack of hunger to succeed in overseas matches is the reason for India‘s poor performance in the ongoing tour of New Zealand. India who were beaten 4-0 in the five-match One-Day International series by New Zealand, also suffered a defeat in the First Test match at Auckland, when they ran the home side close, only to lose by 40 runs.

The losses in New Zealand have prompted critics to raise questions about the Indian team’s ability to adapt and counter the short ball strategy being used by the home team’s pacers to good effect.

Apart from the losses in New Zealand, India had also lost in the previous tour to South Africa where they lost the ODI as well as Test series to Graeme Smith’s men.

The last time India won a Test away from home was during the Kingston Test in West Indies way back in June 2011.

The loss at Auckland marked the ninth defeat for India in 12 matches and has left Wright worried as to whether this side can cast aside their bad form.

“You have got to try and be strong at home and away. Saurav [Ganguly], Rahul [Dravid] and Sachin [Tendulkar] were very keen to win away from home. They were very special,” said Wright who has previously coached India to a series win in Pakistan and also victories in Australia and England.

“It’s about the first innings, when you conceded a lead of 300, it’s very difficult to come back into the game,” added Wright about India conceding a 300-run lead at Auckland.

“They had an opportunity to win the Test [second innings]. They needed one more partnership towards the end. The last 100 runs is always difficult to chase. New Zealand is generally a tough place to tour, most teams find it tough. India will have to play well in the first innings in the second Test,” said Wright on where India really went wrong.

“Given the conditions at Wellington, there will be a result. It is a fair wicket, the ball moves around,” opined Wright about the playing conditions in the second Test at Wellington.

“New Zealand have been pretty consistent. Good for NZ cricket. There are good youngsters coming through and they are playing really well,” concluded Wright on New Zealand’s rise in the Test arena. 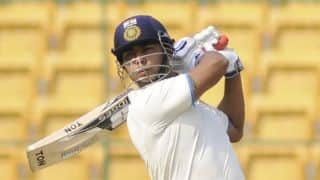