Currently, India are 96 for the loss of two wickets in 21 overs with opener, Rohit Sharma batting on 43.

Defending champions, India are looking to settle down and steer their innings again following the two quick dismissals of Shikhar Dhawan and Virat Kohli, against minnows, Bangladesh, in the 2nd quarter-final of the ICC Cricket World Cup 2015 at the Melbourne Cricket Ground (MCG) in Melbourne on Thursday. Currently, India are 96 for the loss of two wickets in 21 overs with opener, Rohit Sharma batting on 43 and Ajinkya Rahane on four. Live Updates: India vs Bangladesh 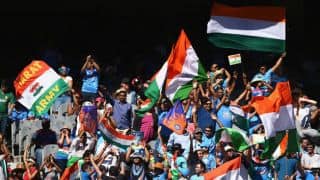