India lost three wickets in the second session on Day Five of the second Test against New Zealand in Wellington on February 18, 2014. India are at 90 for three at tea as they are chasing a monumental target of 435. Virat Kohli is batting on 48 and Rohit Sharma is on 15.

Shikhar Dhawan, Murali Vijay and Cheteshwar Pujara were the wickets to fall in the session. New Zealand had declared at 680 for six before lunch. Brendon McCullum scored a brilliant triple century and James Neesham scored an unbeaten 137.

The second session began with India at 10 for one. Trent Boult struck quickly by dismissing Dhawan LBW for two runs. Replays showed that the ball would have gone above the stumps, but the umpire gave him out.

Vijay then edged an out-swinging delivery from Tim Southee to Corey Anderson at third slip for seven. Kohli then flicked one on the pads from Southee for a four towards fine-leg. Pujara got ooff the mark with a cut shot in front of square on the off side to a back of a length delivery from Boult for a four.

Kohli then hit two fours in-a-row to of Southee’s bowling. First he played a cover drive to a length delivery and then played a hook shot towards square-leg to a bouncer.

Boult then made one move away from Kohli and found the outside edge. Wicketkeeper BJ Watling took the catch and the New Zealand players rejoiced thinking Kohli was out. But the umpire said it was not out. Replays showed that there was definitely an edge on Kohli’s bat.

Wagner bowled a back of a length delivery from round the wicket and Pujara cut that through backward-pint for a four. Those runs brought up India’s 50. But soon after, Southee dismissed Pujara for 17. He bowled a short delivery and Pujara tried to flick it on the leg side, but only edged it to Watling.

Southee bowled a bouncer and Kohli hooked it over fine-leg for a six. Wagner bowled a short delivery from round the wicket and Rohit pulled it for a four towards square-leg. Wagner then bowled a full delivery and Rohit played a brilliant cover drive for a four.

Kohli got another four towards square-leg to a back of a length delivery from Southee. He pulled the delivery, but Tom Latham could not spot the ball at the boundary as it went wide of him.

Rohit then hit one back to Southee, who dropped a low catch onto the ground and collected it while rolling. There was a half-hearted appeal, but replays clearly showed that the ball had bounced before Southee collected it in the end.

James Neesham bowled a half-volley and Rohit flicked it wide of long-on for a four. Tea was soon called by the umpires as India still needed an improbable 345 runs to win the second Test. 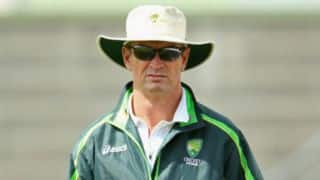