Rahane said the target of 146 was achievable for his batsmen but gave credit to the Zimbabweans for their good show.

Harare: Indian captain Ajinkya Rahane rued his side’s failure with the bat to lose the second T20 International against Zimbabwe but said that he was happy with the overall performance of the team in the cricket tour. “We did not bat well today, we accept that. We lost wickets continuously. That’s why pressure was built. It’s disappointing to lose the game today,” Rahane said after India lost the second T20 International by 10 runs to share the series 1-1. READ: Zimbabwe record first-ever T20I win against India with 10-run win in 2nd T20I at Harare

“But we played pretty well in the one-dayers and T20. Overall, I am happy with the performance of boys in the tour,” he said. India had thrashed Zimbabwe 3-0 in the ODI series that preceded the two T20 matches. SCORECARD: India vs Zimbabwe 2nd ODI at Harare

Rahane said the target of 146 was achievable for his batsmen but gave credit to the Zimbabweans for their good show. “145 was achievable, our bowlers did very well, especially in the last five overs. But we could not do well with the bat. Let us give credit to Zimbabwe. They played good cricket and deserved to win today. I think they were fantastic with the ball and fielded well as well today,” said the visiting captain.

Zimbabwe captain Sikandar Raza expressed happiness that his side pulled off a win today. “We knew we were 10-15 runs short while batting. Basic errors cost us, but our poor run had to come to the end and it came today. I said to the players if we save one run every over, at the end we would have saved 20 runs. Try to contribute like that and at the end we would come out well. Everything has to come to an end, and now we hope we can win more games for Zimbabwe and give the fans something to cheer about,” said Raza who led the side today in the absence of Elton Chingumbura.

Asked how he felt on his first match as captain, he said, “It was my first game as captain for Zimbabwe, it’s a great honour and the team out there made me feel welcome and the fans made their support felt.” 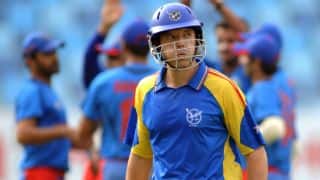