Sri Lanka Men staged a spectacular comeback in the morning session, on Day Two of the Galle Test. Cheteshwar Pujara could add only 9 runs to his overnight score, getting dismissed for a resolute 153. Sri Lanka then made further inroads and sent Ajinkya Rahane packing for 57. The duo added 137 runs for the fourth wicket, laying a strong platform for the lower-middle order. India Men, however, lost Wriddhiman Saha and Ravichandran Ashwin at the stroke of lunch. From 399 for 3, India slumped to 503 for 7 courtesy Nuwan Pradeep‘s top-class bowling.

Pujara achieved a number of feats in the quest. This was his 6th 150-plus score and overall 19th in First-Class cricket. He became only the fourth Indian to attain so on the Sri Lankan soil, after Sachin Tendulkar (203), Virender Sehwag ( 201*), and Shikhar Dhawan (190).

In addition, this was only the second instance when two Indian batters scored over 150 in an innings of an away Test.

Nuwan Pradeep made Pujara his fourth scalp. Bowling in the corridor of uncertainty, he induced a thin edge behind the wickets. Fours over later, Lahiru Kumara got the better of Rahane.

Despite India had enough runs on the scoreboard, Saha played an uncharacteristic stroke. Stepping down the track, he could not get enough elevation and holed out to Dilruwan Perera at mid-on. He became Rangana Herath’s first victim.

That was not it. Only 6 minutes into lunch, Pradeep had Ashwin caught behind off a bouncer, bagging his maiden five-wicket haul.

At the crease are debutant Hardik Pandya (4*) and Ravindra Jadeja (8*).

Pandya, for that matter, took only three deliveries to pick up his first four in the longest format. He shimmied down the track and walloped Herath’s tossed-up delivery down the ground. 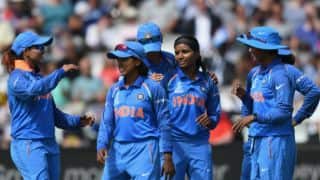