The Indian football team will play Hong Kong at the Salt Lake Stadium on Tuesday in a bid to grab the top spot in Group D.

Kolkata: Indian men’s football team on Tuesday qualified for the Asian Cup Finals after Palestine defeated Philippines 4-0 in a group B match in Ulaanbaatar.

The result meant that the Palestinians directly qualified for the 24-team Finals finishing as group B toppers, while Philippines, with four points, were eliminated despite finishing second.

It is the first time India have qualified for the Asian Cup in two successive editions, having made a group league exit in 2019. The 24 teams in the qualification third round were divided into six groups of four each.

The matches of each group were played across different venues with India hosting the group D games. All the group winners and the five best second-place finishers across the six groups will qualify for the Asian Cup.

As things stand now, Hong Kong (six points) lead group D ahead of India on goal difference as both teams cross swords in their final round clash later in the day. Afghanistan and Cambodia, who are yet to open their respective accounts and are already eliminated, face each other in the other group D match.

So, even if India lose to Hong Kong, they will still have more points than Group B runners-up Philippines (4 points) and will thus make the cut for the Asian Cup as one of the best five runners-up teams.

In their group opener, India rode on captain Sunil Chhetri’s brace to blank Cambodia 2-0, while they secured a last-gasp 2-1 win over Afghanistan in their second match.

Super-sub Sahal Abdul Samad struck a brilliant stoppage time goal to seal the issue after Chhetri’s 83rd international goal was cancelled out by Afghanistan’s Zubayr Amiri in an action-packed last 10 minutes. Chhetri looked really confident ahead of the match against Hong Kong and ensured the fans that the home team will win the last group match.

IND vs SA, 3rd T20I: Bhuvneshwar Kumar On Cusp Of Historic Feat In T20Is At Visakhapatnam 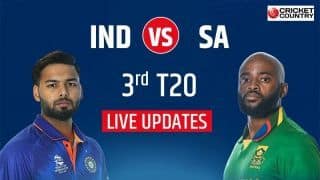