ICC is fearing a revenue loss of at least USD 100 million if tax exemption is not granted for the mega tournament.

Dubai: India could lose out on hosting the 2021 Champions Trophy if the government doesn’t allow tax exemption on the event. The ICC is already exploring alternative host countries in a similar time zone. The International Cricket Council (ICC), after its Board Meeting here yesterday, expressed “concerns” at Indian government’s stance of not approving tax exemptions to ICC events. The world body, however, said it will continue to have dialogue with the Indian government, with the help of the BCCI.

“The (ICC) Board expressed their concern around the absence of a tax exemption from the Indian Government for ICC events held in India despite ongoing efforts from both the ICC and BCCI to secure the exemption which is standard practice for major sporting events around the world,” the ICC said in a statement.

“The Board agreed that ICC management, supported by the BCCI will continue the dialogue with the Indian Government but in the meantime directed ICC management to explore alternative host countries in a similar time zone for the ICC Champions Trophy 2021,” it added.

The BCCI, in its Special General Body Meeting in December last, had announced that the country will host the 2021 Champions Trophy as well as the 2023 World Cup.

According to reports, the ICC is fearing a revenue loss of at least USD 100 million if tax exemption is not granted for the mega tournament. The Indian government did not provide tax exemption for the 2016 World T20.

Also during yesterday’s meeting, the first of 2018, the ICC Board agreed a revised financial model incorporating increased allocations for Ireland and Afghanistan as the newest Full Members of the ICC.

The new model will see Ireland and Afghanistan each receiving a percentage of the projected surplus, amounting under current projections to approximately USD 40m each over the course of the current eight year commercial rights cycle.

Additionally, the ICC Board was provided with an update on the ongoing suspension of Nepal. Following an ICC delegation to Nepal in January, the ICC Board was informed that a general meeting will be held in Nepal in March to adopt an agreed and amended constitution by which the membership base will be determined.

This process is expected to be completed by March with a view to Nepal being readmitted to membership at the ICC’s Annual Conference in June.

The ICC Board also received an update on progress regarding the establishment of a National Governing Body in the USA following the expulsion of USACA in June 2017.

A new NGB USA Cricket and the election of a new Board and Chair under a new constitution is expected to be completed in early June. It is envisaged that USA Cricket will subsequently be in a position to apply to become an Associate Member at the ICC Annual Conference. 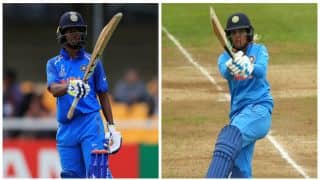