Yashasvi Jaiswal, Vaibhav Kandpal slam tons as India Under-19 take control against South Africa Under-19 i

At sumps, the visiting side was 50 for 2 in their second innings, still adrift by 193 runs.

Centuries by Yashasvi Jaiswal (173) and Vaibhav Kandpal (120) helped India Under-19 pile up 395 in their first innings and take control of the proceedings on day two of the second Youth Test against South Africa Under-19 here Wednesday.

Resuming at the overnight score of 112 for 2 in reply to South Africa’s 152 all out in the first innings, Jaiswal continued to play well though he kept on losing partners at the other end.

The South African bowlers didn’t allow India to get away by taking a few wickets and had the host’s in trouble at 177 for 5.

Jaiswal, who struck 24 boundaries, and Kandpal stitched together a 89-run stand for the sixth wicket during which the two played some enterprising cricket.

Jaiswal, who displayed a lot of patience during his knock, also flayed the bad balls on either side of the wicket.

However, a 54-run stand for the eighth wicket between Kandpal and Anshul Kamboj (30, 34 balls, 1X4, 4X6s) took the hosts close to the 400-run mark. (ALSO READ: India Under-19 team beat South Africa by nine wickets in first Youth Test)

Needing a solid effort from the batsmen in the second innings to save the Test and prevent a whitewash, South Africa lost opener Ruan Terblanche (2) in the fourth over to Manipur paceman Rex Singh.

Skipper Montgomery looked positive in his approach and slammed six fours in his unbeaten 34 as the team ended the day at 50 for 2 in 21 overs.

India had won the first Test in three days to take a 1-0 lead in the two-match series. 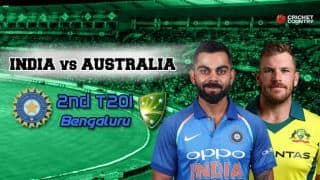