Afghanistan have started off very well in their Asia Cup encounter against India at the Shere Bangla National Stadium, Dhaka. Earlier, Indian skipper Virat Kohli won the toss and chose to bowl first. India are playing an unchanged side, while Afghanistan have dropped Hamza Hotak and brought in Rahmat Shah.

Bhuvneshwar Kumar started the innings with Noor Ali facing. The first over went for two and then in the first over bowled by Mohammed Shami, he was taken off for 14 runs. The shot of the over was when Ali stood tall and guided it through the off-side for a four.

Bhuvneshwar made a slight recovery in the third over. After three overs, Afghanistan are 20 for no loss. 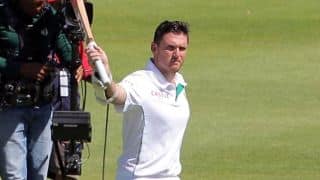