Nawroz Mangal's innings has kept Afghanistan in the hunt as they try to chase 365.

Nawroz Mangal completes his half-century and he still keeps Afghanistan in the game. Mangal put on a 63-run stand with Usman Ghani for the second wicket and has ensured that Afghanistan do not lose more wickets in a hurry. Mangal came in at No.3 after opener Javed Ahmadi went for 17, while he was looking for the big shot. Catch Live Blog of the warm-up match here

India’s bowling has been far from convincing and have been sloppy in the field as well. Usman Ghani was the last man dismissed for 44 after Shikhar Dhawan and Umesh Yadav teamed up to take a bizarre catch. Afghanistan would hope to put up a good performance and carry some momentum in to the ICC Cricket World Cup 2015. Catch the Live Cricket Scorecard here

Earlier India had won the toss and elected to bat first. Both India and Afghanistan will be testing their entire squad as all the players are fir and rearing to go. This is the last warm-up match for both teams and they would want to get their combinations right ahead of the ICC Cricket World Cup, which begins on February 14. ICC Cricket World Cup 2015: POINTS TABLE 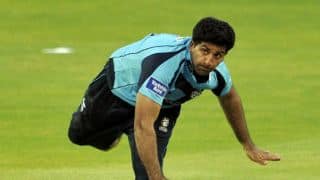