On Saturday, the selection for the Australia tour gave many players a pleasant surprise while for many it turned out to be a disappointment. One of them was the Mumbai based fast pace bowler, Dhawal Kulkarni. Last year, the seamer was a stand by for the ICC World Cup 2015 Down Under, where he was an additional member. Surprisingly, today he does not even fall into the selector’s scheme. In the on-going Vijay Hazare Trophy he has been the second highest wicket-taker with 14 wickets at an economy of 3.92. Kulkarni last played for India at Zimbabwe in July, taking two wickets in two games. ALSO READ: Is Dhawal Kulkarni a contender for India’s ICC World Cup 2015 squad?

A rather dejected Kulkarni told DNA, “I was expecting a call; since I went to Australia last year and was part of stand by’s for the World Cup. I was the joint-second highest wicket-taker in Vijay Hazare and I had a feeling that I would be selected. Somehow, I did not.” Kulkarni further added, “It is very disappointing that I was not picked. I have always got limited opportunities. Whatever chance I get, I try to prove myself. I thought if I do well in the one-dayers (Vijay Hazare Trophy), I would be back in the team. If I am not performing, I don’t feel that I deserve to be there. I have always taken it as a challenge and have performed with the hope of being part of the team.”

He played One-Day Internationals (ODIs) against Bangladesh and got three wickets in couple of games. His best performance came out in Sri Lanka where he took eight wickets with 4-34 in Kolkata being his best. The 27-year-old Mumbai-born cricketer says he has always been under pressure to perform. He said, “I have got limited opportunities, and so I have to perform somehow. It’s not that I did not get opportunities, whatever teams you play, you have to prove yourself. But every match is a pressure game for me. I have to perform and give 100 per cent in every game; otherwise you don’t know the future.” ALSO READ: India’s squad for Australia features bold decisions that hold the promise of paying off

He also added that it was not only him but many others were rooting to get selected. He said, “Everybody expected me to be a part of this team. I will have to wait longer. I don’t know when my next overseas tour will be. Even the season is coming to an end. I could have been given an opportunity.” He also said that he will take this as a challenge to prove himself in the coming matches and make a comeback. “I will keep doing my job. I didn’t expect to be there for games in India, since spinners play a bigger role. However, I will have to move forward and keep performing. That has always been my attitude. I have gone through this before, but I have always replied by performing. I will start my journey to be where I deserve,” he said. ALSO READ: India announce squad for ODI series of Australia; MS Dhoni, Virat Kohli retain leadership

As India was looking for a genuine fast pace bowler, he feels the pace might have gone against him, “I may not bowl 140kmph plus, but I believe in keeping it tight and trying to out-think the batsman. Even Glenn McGrath did not have the pace and did not swing big.” 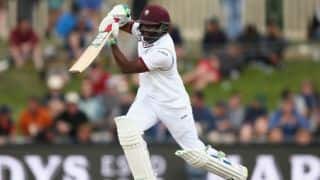