VIDEO: An ODI series win will be a big achievement for us: Shikhar Dhawan

VIDEO: An ODI series win will be a big achievement for us: Shikhar Dhawan

India will be looking to make history by winning the first ever bilateral ODI series on Australian soil, following up on the 2-1 Test series win.

With all to play for in the third and final ODI, India will be looking to make history by winning the first ever bilateral ODI series on Australian soil, following up on the 2-1 Test series win.

Winning the series will mean a lot to us. Winning both Tests and if we win tomorrow, it is going to be a big achievement for us. We are going to value it and cherish it, Shikhar Dhawan told reporters at Melbourne on Thursday. (ALSO READ: Sourav Ganguly on Hardik Pandya-KL Rahul row: People make mistakes, let’s not get too far into that)

Dhawan is one among three batsmen MS Dhoni and Ambati Rayudu being the other two, returning to the squad after missing out on the four-match Test series. I had 5-6 weeks off and I was training hard. It was good because, looking forward to the World Cup, it was a good break for me. Now I m happy to be back in the side, playing matches and raring to go, he said.

I think my rhythm is there, the way I was hitting the ball. It is very important to take a break and feel fresh, which we Indian cricketers don t get much of, so we re not used to it. (VIDEO: Bhuvneshwar Kumar perfecting toe-crushers)

Meanwhile, the southpaw revealed that the team is happy to see Dhoni find his form back. The senior pro was criticised for his sluggish start in the opening one-dayer is Sydney.

It was good to see a good team performance in the last game, especially how Dhoni performed well in both the games. We are very happy that Dhoni is getting his touch back. Because a player of his stature, gives so much of confidence to the batsmen at the other end, he said. 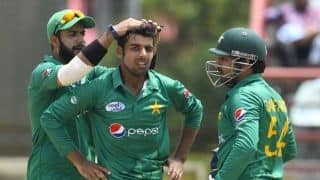