Ganguly asserted that everyone should move on and ensure it doesn't happen again.

Mumbai: Former India captain Sourav Ganguly has defended Hardik Pandya and KL Rahul over their widely criticised comments on a popular TV show and said that people make mistakes, but everyone should move on and ensure it doesn’t happen again.

Ganguly spoke at the trailer launch of the Hindi film 22 Yards.

Despite an apology to fans and their own teammates, Pandya and Rahul were suspended by the BCCI and ousted from a three-match ODI series against Australia in Sydney. (ALSO READ: Hardik Pandya and KL Rahul will learn from their mistakes, give them another chance: Simon Taufel)

Asked if modern day cricketers should be responsible while giving statements on a public platform as a whole lot of youngsters look up to them, Ganguly said: “I haven’t watched that episode. I watch Comedy Nights with Kapil’. Jokes apart, I feel that you can’t generalise that only modern day cricketers should behave responsibly. People make mistakes. Let’s not get too far into that. (ALSO READ: KL Rahul, Hardik Pandya tender unconditional apology; BCCI members demand SGM)

“I am sure whoever has done it will realise that and come out as a better person. We are all human beings. We are not machines that everything you put in comes out perfect. You have just got to live life and let others live. They are responsible people. They may be role models, but they are under pressure all the time to perform. Certain things happen in life and as everyone, we should move on and make sure that it doesn’t happen again.”

Does he feel modern day cricketers of India aren’t responsible in their behaviour as compared to the past generation of cricketers?

Ganguly said: “I feel modern day cricketers are also responsible, disciplined and obedient. In life, certain things happen, and you make some mistakes so, let’s not get too far into that. Look at Virat Kohli, he is such a fantastic role model. India is a fortunate country. Every generation produces players who all of us cherish.” (ALSO READ: Hoping Hardik Pandya will be allowed to play New Zealand series: Kiran More)

He said India has produced great cricketers like Sunil Gavaskar, Sachin Tendulkar and Kohli over the years.

“There was Sunil Gavaskar and when he retired, people thought who is next, then Sachin Tendulkar came and when Tendulkar retired, people again asked who is next then people saw Virat Kohli. So, we are a very fortunate country in terms of sports and a lot of these cricketers are fantastic human beings because they come from very middle-class backgrounds and fight their way up.” 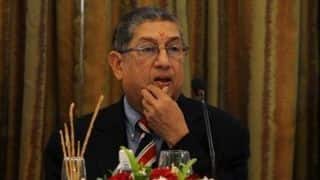