This marks the third instance of an all-pace Indian team, after Johannesburg this year and Perth in 2011-12.

An unchanged Australia will bat first in the first Test at Perth’s Optus Stadium, after Tim Paine won the toss and decided that the home team wanted to have first use of a surface he felt would crack up as the match progresses.

His counterpart, Virat Kohli, picked four fast bowlers and said he wanted to bat as well. For the first time since Johannesburg in January, India did not pick a spinner – R Ashwin is out and Ravindra Jadeja was the only one named in the squad of 13 for this Test – and instead went for the extra pace of Umesh Yadav.

This marks the third instance of an all-pace Indian team, after the aforementioned Test in South Africa and at Perth’s WACA Ground during the 2011-12.

Umesh played that Perth Test – which Australia won by an innings – and took his first Test five-wicket haul. His second, and only since, came against West Indies in Hyderabad last month in India’s previous Test.

As expected, Hanuma Vihari came in for his second Test since September, with Rohit Sharma out injured.

India will retain the Border-Gavaskar Trophy if they win the Perth Test. 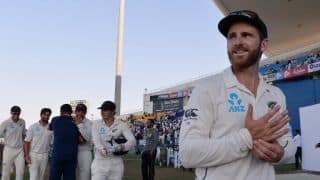