WICKET – Josh Hazlewood’s persistence pays off. He bowls in on the off stump channel, a tad short and Ajinkya Rahane slashes at it hard, but hits it straight to point fielder Travis Head. India five down for 98. Last recognized batsman, Rishabh Pant, in the middle to join Hanuma Vihari

Ajinkya Rahane and Hanuma Vihari fighting it out. The target is under 200 now. India 90/4

Nathan Lyon at it again. Proper off spinner’s wicket. Flighted and Vijay comes forward for the drive, the ball hits the rough and takes the inside edge and on to the stumps. India 55/4

Mitchell Marsh trying to have a bowl

If the first session today was a passenger train, moving slow, then this second session was a bullet train, blowing away everything on its way with its speed.

WICKET – The first big fish departs – Cheteshwar Pujara gets a rising delivery and from Josh Hazlewood and edges it to Tim Paine. India 13/2

WICKET – KL Rahul’s horror runs continues. Mitchell Starc gets the ball to swing in, KL Rahul tries to leave, is a bit late as the ball takes the inside edge of the bat and crashes on to the stumps. India 01/ chasing 287 to win

And Jasprit Bumrah wraps it up – Australia 243 all out, set India a target of 287 runs to win the 2nd Test

This is now seven Test matches in a row where India have allowed the opposition No.8-11s to contribute 75+ runs in the match. #AUSvIND

WICKET – This time it is Jasprit Bumrah, but he will be the first to admit, that wasn’t his wicket, that was the Otpus Stadium’s wicket. On the stumps, no bounce and the ball sneaks underneath Pat Cummins’ bat. Cleaned up. Australia 198/8. Since lunch, Australia have lost four wickets for eight runs

5-for for Mohammad Shami – And he removes the well-set Usman Khawaja with another short of length delviery that rises up sharply and Khawaja manages to glove it to wicketkeeper Rishabh Pant. Second five-wicket haul of the year for the Bengal pacer. Also, he becomes the Indian player with most wickets in away Tests in a calendar year.

Back after lunch and Shami has two in two – Would you believe it, Australia went in to lunch at a healthy 190/4, and after the first over in to lunch Australia are 192/6. India fightback. Tim Paine got a brute of delivery that rose from the good length area to surprise the Australian skipper. The ball lobs up after hitting Paine hit on the bat and Virat Kohli took an easy catch. Next up, taped up Aaron Finch flicked one down the legside only to get a faint edge to walk back for 25. A very slow session but could be a match-defining one. 30 overs, 58 runs and no wickets lost. The lead has swelled up to 233. The Aussies firmly in the driver’s seat now. They can step up the gas and go on overdrive mode once they are back, and look to score as many quick runs as possible. With the declaration on the back of their mind, Tim Paine and co. would like to bat India out of the game and also ensure they have enough time left to bowl out the visitors in the fourth innings. The Indian pacers have toiled hard since morning, even beat the outside edges on numerous occasions but the rub of green was in Australia’s favour, although it would do well not to take anything away from the way the two batsmen out in the middle have played.

Australia now leads by 200 runs. Only twice has India chased down 200+ in a Test outside of Asia.#AUSvIND @FoxCricket

Virat Kohli trying to unsettle Tim Paine and Paine is not backing away. Words exchanged. Umpire Chris Gaffaney has to intervene and ask both the rival skippers to just play on What a stat

Jasprit Bumrah has drawn 33 play-and-misses in this Test match. No other bowler in the CricViz database (2006-present) has drawn more in a single Test match in Australia. A gem of a performance. #AUSvIND pic.twitter.com/ll8kABt1Eo

Look at the move

50 for Usman Khawaja – Off 155 balls, patience personified. Usman Khawaja copped a lot of blows on his body, but he has gritted it out in the middle and reaches his 14th Test fifty. Australia’s lead also touches 2oo. India letting this one go. They need a wicket, desperately.

150 up for Australia. Tim Paine and Usman Khawaja have done really well to play out the 1st hour of play. Australia 151/4, lead by 194 Interesting field position for Tim Paine. A leg slip in place and Ishant Sharma is aiming that rib cage area of Paine In comes Umesh Yadav for a fresh spell – he was expensive, Virat Kohli would be hoping he can get his line right today – Australia 143/4, lead 186

RUN-OUT CHANCE – Usman Khawaja pushes one down and runs, hesitation in the middle, Jasprit Bumrah gets to the ball and throws at the non-striker’s end, he misses. Khawaja far far away from the crease.

WATCH: See the inside of Marcus Harris’ helmet after he copped a brutal bouncer yesterday.#AUSvIND #FoxCricket pic.twitter.com/BT7Ve9Ejud

This is good news for Australia

And we are underway folks! Day 4 – Australia 132/4, lead India by 175 runs. Jasprit Bumrah starts the proceedings and Tim Paine takes a single off the first delivery Hello and welcome to

LIVE coverage of Day 4 of the second Test between India and Australia from Perth’s new Optus Stadium After yet another fascinating day of Test cricket, India will be looking to bowl out the hosts for as few runs as possible with the lead now extended to 175 runs. Usman Khawaja, who has been the anchor in the second innings, is the danger man and India will want to see his back early in the morning.

ALSO READ: The best and worst from Day 3 of the Perth Test Highlights of Day 3

Quotes: I don’t like Virat Kohli’s attitude at the moment: Michael Hussey

Quotes: We were a little surprised by the on-field call: Jasprit Bumrah on Virat Kohli’s controversial dismissal 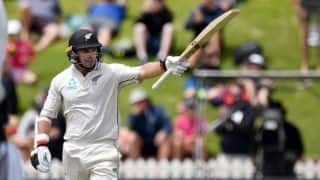