Follow all the live updates from the 3rd T20I between India and Australia in Sydney.

That’s it. India WIN. Kohli helps himself to back-to-back boundaries to lead India to a comfortable 6-wicket win over Australia. The series finishes at 1-1.

Over 18: BANGGG! A huge SIX from Dinesh Karthik brings the equation down to 16 off 12. Meanwhile, Kohli has brought up yet another half-century.

Over 17: Oh Virat Kohli, you beauty. That’s why he is the best in the world. A six over midwicket off Maxwell gets India back in the game. 13 runs came off that over, despite a close run-out chance of Karthik. India 138/4, need 27 off 18.

And just when we said it, Kohli proved us wrong. He takes a four and a six off Tye as India take 12 runs off the 16th over. 125/4 and they need 40 off 24 deliveries. This is going to be a close finish, we have a feeling, folks.

Zampa makes the equation tighter. Just four runs off the 15th over. India 113/4, need 52 in the last five overs. The spinners have made the difference for Australia. The key for India is Virat Kohli, but oddly enough, he is struggling a little to middle the ball.

India lose TWO in TWO: Just like Australia. India have followed the script of losing two wickets in two balls. KL Rahul danced down to Maxwell and was caught at long-on. Next ball, Rishabh Pant falls to a soft dismissal, gloves a short ball to Alex Carey. India 108/4 in 13.1 overs, need 57 off 38. Australia are right back in it.

The 100 is up for India. They are 102/2 in 12 overs. Australia trying to pull things back through Maxwell and Zampa. India are way ahead of Australia at the same stage here. India need 62 off 46.

End of over 10: Halfway through the innings and India have progressed well to reach 92/2. 11 runs came off that over from Zampa with Kohli helping himself to his first boundary.

End over Over 8: India score 11 to move to 78/2. KL Rahul announces himself with a six as the equation now reads 87 off 72. Taking singles will be extremely crucial for India. Australia have introduced Glenn Maxwell. Will he do for Australia what Krunal did for India?

WICKET: A quicker one from Adam Zampa clean bowls Rohit Sharma for 23. A wicket maiden to start with for the legspinner. India 67/2 after 7 overs. They need another 98 off 78.

WICKET: An entertaining knock from Shikhar Dhawan comes to an end. Mitchell Starc gets him out LBW for a 22-ball 41. It was fast and full, rapping Dhawan on the front pad. Originally given not out, Australia reap the benefits of a successful review. India 67/1

FIFTY up for India, and it has taken just 4.4 overs to get there. Rohit and Dhawan are on fire. Another expensive over, as India take 22 off Marcus Stoinis’ first of the innings. Rohit began the over with a six over long-on and Dhawan finished it with a 6, 4 and 4 off the last three deliveries. India 64/0 in 5 overs.

Over 4: Expensive 20-run over from Australia as Dhawan and Rohit peel off a six each off Coultter-Nile. The left-hander crunches the last ball through the offside for a boundary to finish the over. India 40 without loss.

End of Over 3 and India are 20/0. A perfect cover drive from Dhawan spoils a good second over from Starc.

Over 2: A boundary each to Rohit and Dhawan, and India are off the blocks in their chase. Almost identical boundaries for both batsmen, flicking a delivery towards the fine-leg boundary. India 12/0.

Over 1: A quick and fast first over from Mitchell Starc, clocking over 140 and testing Shikhar Dhawan and Rohit Sharma. India 3/0.

And that is the end of the innings. Australia finish on 164/6 and India will have to score at over 8 runs an over to avoid defeat in the series. Tremendous effort from Marcus Stoinis and Nathan Coulter-Nile towards the end to score 33 off 16 balls. With the kind of start they had, Australia would be a touch disappointed with the score but the frequency with which they were losing wickets in the middle overs, Australia would take 164.

End of Over 19: Welcome over for Australia as they bag 12 runs off the penultimate over. Australia 146 for 9 with one over to go. India have bowled 40 DOT BALLS in the innings. That;s 189 right there.

WICKET: Confusion between Lynn and Stoinis. Stoinis dabs the ball down on the ground, and Bumrah picks up the ball, turns around in swift motion and hits the stumps directly. Australia 6 down for 131.

WICKET: Fourth wicket for Krunal After giving away consecutive fours, he removes Alex Carey, caught in the deep. Australia 120/5 in 16 overs.

And it’s wicket No. 3 for Krunal Pandya. Drops in short and Glenn Maxwell goes for it. Rohit Sharma, stationed at long-on doesn’t drop this one. The pressure was mounting and Maxwell fell to it. Australia 98 for 4 with six overs to go.

Pressure mounting on Australia. Fabulous over from Kuldeep to give away just 5 runs in the over. India dealing many dot balls.

After 12 overs, Australia are 85 for 3. Glenn Maxwell and Alex Carey will have to do the repair work. Kohli has taken Krunal off the attack and brought back Khaleel in the middle overs. Good move. Australia are scoring at just over 7 runs an over. Kuldeep with the ball. You have a feeling that something’s got to give at the SCG.

Make that THREE: What a turnaround from India. Krunal Pandya strikes twice in two balls to bring India back in the match. Ben McDermott sweeps and is given out LBW first ball. Australia 76/3. What an over this from him – 3 runs and two wickets.

TWO wickets in quick succession for India: It’s all happening out there. Aaron Finch top edges a sweep from Kuldeep Yadav and is out caught by Krunal Pandya at short fine-leg. Two balls later, Glenn Maxwell was declared out leg before but the decision was overtunred. Next ball, another leg before short but India were given the decision this time as Krunal removed Darcy Short.

DROPPED: Oh dear! This is terrible from India. If the ground fielding wasn’t good enough, the catching is even worse. Rohit Sharma has dropped a simple chance. Krunal Pandya flighted the ball and Finch skied it in the air. Rohit did everything right. Ran hard, covered the distance and got into position. But PUT IT DOWN. To make matters worse, India are leaking runs. EIGHT OVERS GONE, Australia are 64 without loss.

Over 6: End of Powerplay and Australia will be happy to reach 49 without the loss of any wicket. A nice, tight over from Bumrah was spoiled in the last ball as Short took a full toss and sent the ball crashing towards the point boundary. The platform has been set and Australia look strong for a big score.

Over 5: Khaleel struggling a bit. Finch takes him for two boundaries in the over as Australia reach 41/0 with one over left in Powerplay.

Over 4: Steady start for Australia. Finch and Short have batted out four overs and taken Australia to 28 for no loss. India have introduced Jasprit Bumrah as their first chance and his first ball was taken for a boundary by Short. Finch is 8 off 11, while Short has faced 17 balls to score 14.

Over 3: Australia are 21 without loss. Short started the over with a cracking boundary straight over Bhuvneshwar, but he tightened things up in the next five deliveries.

Over 2: Another 8-run over. Finch smokes Khaleel for a boundary towards deep midwicket, and survives a run-out chance from Virat Kohli. Australia 16 for 0. This looks like being a high-scoring game.

Over 1: Decent start for Australia. 8 off it. D’Arcy Short crashes one through the offside for his first boundary. The surface isn’t the quickest but just about enough to give India a chance.

The openers are out there in the middle. Aaron Finch and D’Arcy Short have not been among the runs and India would be aware of that. Bhuvneshwar Kumar has the new ball and he would want to use his experience to get India an early breakthrough.

Kohli: We would have bowled first as well anyway. The last game we played here, we chased down a big score. Even at the MCG, we were able to restrict them to a decent score.Just like it to continue and force them put a score that they want to defend. It’s always lovely to play in Sydney, we get a lot of support here. Always a full house and 85% Indian fans here. Our intensity was right up there in the last game and we’re really looking forward to this one. We’re unchanged.

Finch: We will have a bat first. Looks a pretty good wicket, a bit dry and if we can put runs on the board, we are backing ourselves to defend anything. One change, Starc comes in for Behrendorff. It’s exciting to have Mitchy back in the side, it’s been two years since he’s played a game and is raring to go.

12:50 PM: AUSTRALIA have won the toss and they have decided to bat against an unchanged India at the Sydney Cricket Ground. Mitchell Starc is back for the Aussies. And the best update: THERE IS NO FORECAST OF RAIN.

Hello everyone! Welcome to our live coverage from the 3rd and final T20I between India and Australia to be played at the Sydney Cricket Ground. Rain was the winner in the second match on Friday ruining India’s chances of drawing level in the three-match series. India are still fighting to save the series which they are trailing 0-1. Australia can still clinch their first ever series win in the format over the tourists.

For Australia, a win will do a world of confidence to their confidence. The return of Mitchell Starc will be a shot in the arm for them. Together with Jason Behrendorff, India’s batsmen won’t have it easy facing two left-arm quicks. Aaron Finch’s form is a bit of a concern for them and the captain would want to get that issue out of the way with the Test series so close. In order to build on the 1-1 scoreline and exact revenge for the 0-3 sweep in 2016, it will once again have to be their batting that will have to avoid what transpired in Melbourne where Australia were reduced to 62 for 5. Click here to read more.

Preview: Will Starc’s return spoil the party for India?

Video: Lot to play for Australia, pride at stake for India 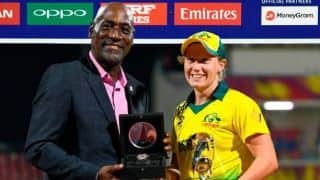 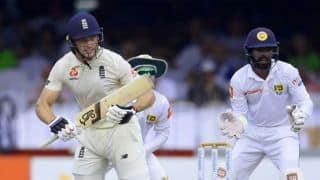