That’s all from us, folks. We head into the final day of the MCG Test. But here is the most important word: RAIN. However, rain was predicted even today and we did not lose a single ball. We’re all lined up for a memorable Sunday, whatever the result is. Join us tomorrow. TIll then, good day.

That’s it. End of Day 5. For the third time in the series, a Test match will enter the fifth day. India, despite the extended session, could not pick up the last two Australian wickets. Defying India was Pat Cummins, and his second Test half-century. He remains unbeaten on 61 as Australia finish on 258 for 8. Who would have imaged that at 156 for 7.

– India have taken the second new ball. Every ball faced is being cheered loudly by the spectators at the “G”.

– Let’s take a moment here and credit Pat Cummins for just how amazing he has been during his innings of 46 not out here.

Session extended by half an hour: The mandatory overs for the day have been bowled and the umpires have gone ahead to hand India the extra half hour. Eight overs more for India to script their first Test win in Melbourne since 1981.

– Three overs remain. And then it’s up to the umpires to decide whether or not play can be extended.

BOWLED HIM: TIMBERRR! Mohammed Shami cleans up Mitchell Starc. India now just two wickets away from securing a 2-1 lead. Swinging delivery and Starc goes for the slog. But the ball sneaks in between the bat and his body to rattle the stumps. Australia 215 for 8.

UPDATE: Seven overs remain in the day. But if the umpires feel a result is possible, play can be extended by eight more overs. Hence, India could have 15 overs left to pick up three wickets. Australia 208 for 7.

WICKET: Australia 176 for 7. Goooneee! Yes, there is a nick there and Pant holds on. Third wicket for Ravindra Jadeja as his ploy of operating from over the wicket works. We are now into the tail. Surely, India will fancy wrapping things up today itself.

End of Over 60: Australia have moved to 175 for 6. Tim Paine and Pat Cummins are trying to resist, having put 18 off 58. This is the partnership they need to break. Cummins has frustrated India with the bat throughout the series but it’s all about time for Australia from here on. Paine has batted positively to score 25 off 61.

WICKET: Travis Head chops on. Full and wide outside off from Ishant and Head goes fetching it without moving his feet. Ishant rewarded finally for a decent spell. Australia 157 for 6. Is that the final blow?

– A streaky boundary through slips from Tim Paine brings up the 150 for Australia. Twice has Shami found the edge in that over and the second ball would have carried straight to second slip had there been one.

It was Rishabh Pant’s turn for some fun on the stump mic today… #AUSvIND pic.twitter.com/RS8I6kI55f

End of second session: Australia 138 for 5 at tea. Swatting away thoughts of rain, India picked up three wickets in the session which leaves them with five more to get from 35 overs. And remember, if needed, India can take the extra overs if they close in on a 2-1 lead. Fight shown by Shaun Marsh but it was always going to be plenty for Australia. India would be happy with the effort though. Join us in 15 minutes for the final session of the day.

Chirping begins: After Tim Paine tried to get under Pant’s skin yesterday, it’s the India’s turn to turn the tables. Plenty of

WICKET: Mitchell Marsh hits Jadeja straight to Virat Kohli at cover. Australia have lost HALF THEIR SIDE for 135.

– Jadeja getting some serious purchase out of the surface now. An edge from Head put down from Pant, an extremely difficult chance. Next ball, the ball turns visciously to deflect in the air off Pant. It’s getting tougher and tougher. And with the speed Jadeja is bowling, there is absolutelty no time for the batsmen to break out. Oh hang, on, Marsh proves us wrong. SIX over long-on. Australia 133 for 4.

If you were the umpire, would you have given this one?

OUT: It’s that man again, Bumrah, who gets Shaun Marsh out LBW. And oh dear, it was quite a close call. Marsh went upstairs and the ball was just about clipping the leg stump. But since the umpire’s decision was OUT, it was all that India needed. Australia 114 for 4. This partnership was starting to develop, having reached 50 off just 67 balls.

– Drinks being brought into the field. Australia approaching 100, with Marsh looking confident. His partner Travis Head has started well to score 16 off 28 and this partnership beginning to develop (32 off 48). India have brought back Bumrah. They seem to be going for the kill.

FOUR: Shaun Marsh is looking so good during this innings. He hasn’t bogged down, and driven elegantly. His footwork against Jadeja and pacers has been equally impressive. Half-volleys have been punished. He reaches 25, Australia 88 for 3.

WICKET: And there you have it. Mohammed Shami traps Usman Khawaja LBW for 33 as Australia lose their third for 63. Pitches in line and straightens just about enough to hit Khawaja’s back pad in line of the stumps. The batsman took the review but it was always going to hit the stumps.

– Australia looking positive. They are not just defending blindly. If a loose delivery is on offer, they are taking care of it. Khawaja just creamed a delightful four off Shami, who is not getting any movement. Australia 62 for 2.

– 10 runs come off the first over after lunch. A couple of boundaries in there, one leg bye and the other from a booming cover drive from Shaun Marsh. Meanwhile, KL Rahul has come in as a substitute for Mayank Agarwal who copped a blow to his next while fielding at forward short leg.

– Second session about to commence. Indian team in a huddle. This has to be the session for India. With rain looming later in the afternoon, India would want to get as many wickets as possible out of the next 28-odd overs.

Wait! The covers have come off and we will beging the secon session as per the scheduled time. Great news for India.

The first sign of rain on Day 4. It’s started to drizzle at the MCG here and the covers are on. Although it’s not heavy at the moment, we might have a delayed start to the second session,

LUNCH on Day 4: Australia reach 44 for 2. A productive session this for India with Jasprit Bumrah and Ravindra Jadeja accounting for the wickets of openers Aaron Finch and Marcus Harris. Shaun Marsh and Usman Khawaja have seen Australia through to lunch without any further harm but it’s just the beginning. Australia need rain, and they need it quickly. We’ll be back in 40-minutes time.

WICKET: Inside edge and taken. Mayank Agarwal hangs on to another sharp catch at forward short leg. Jadeja gets one to pitch on the rough and the ball turns to take the inside half of Marcus Harris’ bat straight to Agarwal. Australia 33 for 2.

Irrespective of the outcome of the match, this was one heck of a spell from Pat Cummins…

Review Lost: India lose their first review of the innings. Huge bat pad appeal against Khawaja from Jadeja which was turned down by the umpire. Kohli goes upstairs but there was no glove or bat involved.

– Four overs gone. Australia 16 for 1. This has been absolute terrific stuff from India’s new-ball bowlers. Chances are being created constantly and with 35 minutes to go for lunch, they would want to get at least two more. Very likely.

OUT: There’s wicket No. 1 for India. And guess the wicket-taker? Yup, it’s “BOOMrah”. He gets one to just come back in and and a poor shot from Aaron Finch as he pokes at the delivery. Takes the edge and it’s the skipper, Virat Kohli who completes the catch. Australia 6/1, India need 9 more.

The Indian team is out there and so are Marcus Harris and Aaron Finch. Ishant Sharma has the ball. The final session of the Test is underway.

India declare: It’s finally come, the decision everyone was awaiting. With a lead of 398 runs, Virat Kohli has declared the innings on 106 for 8, meaning Australia will need to chase down 399 in the fourth innings to win the match. India are 10 wickets away from a 2-1 lead in the series, with rain being the only factor standing between them and a victory here. Stay with us, we’ll bring you the fourth innings shortly.

– Pant goes big, hammers Josh Hazlewood down the ground for a six. Even Virat Kohli is amazed. Lead is now 398.

OUT: Jadeja takes Cummins on. Swats him towards the midwicket boundary for a FOUR. But he gets his revenge the next ball, with a rising delivery that Jadeja fails to get under. Top edges the ball and the catch is taken. With that, Cummins has registered his career-best figures in Test cricket. India 100 for 7, and there are still batting.

– Jadeja swings and misses. The ball would have gone out of here had it connected. Another big swat by Rishabh Pant two balls later. The intent is clear. India are going for it. They are nearing that 400-run lead and surely, that should be it.

– There’s been no serious rain threat yet but it might later on. Whatever India need to do, they’ve got to do it today and not leave anything for tomorrow? Why you ask? That’s because there is 80 percent chance of rain on Sunday.

Agarwal’s reaction to a Cummins delivery that jagged back in a big way! #AUSvIND pic.twitter.com/ERfZvLJRpV

BOWLED HIM: And there you go. Agarwal done in by low bounce. Five wickets for Cummins. And boy, he deserves it. India 82 for 6, lead by 375.

– This MCG surface is really posing questions to the batsmen. Cummins steams in and the ball, after pitching, beats Mayank Agarwal and flies past his legstump for a boundary. The next ball stays low.

– Rishabh Pant isn’t holding back either. He opens the face of the bat and guides the ball wide of gully for his second boundary of the day. Next ball, does the sensible thing and gives Agarwal the strike. One more six, anyone? India 78 for 5.

And the covers are off again! What an absolute roller coaster! #AUSvIND pic.twitter.com/LOZU1T7hJQ

India ahead by 350: An eventful start to the day already. An inside edge from Rishabh Pant goes past a diving Tim Paine which brings takes India’s lead past 350. India have declared their intentions early. Mayank Agarwal dances down the pitch to take Nathan Lyon, and carts two sixes off the offspinner in one over. How long will India bat? By what we’ve seen so far, should’t go beyond the first session.

Hello everyone, and welcome to CricketCountry‘s Day 4 coverage of the Boxing Day Test between India and Australia at the MCG. Let’s start this day with some good news. It is overcast right now in Melbourne, and although the covers are on, there has been no rain yet. With India almost ahead by 350, today could very well be the final day of the Test given there are no rain interruptions. 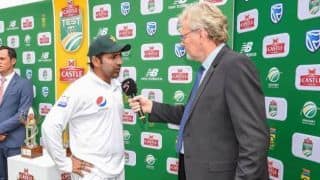 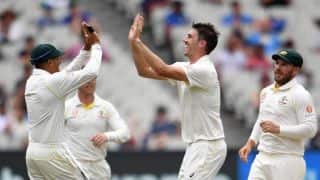