There have been five centuries scored in three MCG matches this Sheffield Shield season.

Australia s veteran fast bowler Peter Siddle has played down fears of a lifeless MCG pitch ahead of the third Test against India on Boxing Day. Siddle said the pitch, which was deemed poor by the ICC last summer during the tame Ashes Test draw, will produce a result.

This time around curator of the MCG Matt Page is believed to inject more life in the drop-in wicket by putting a layer of sand between the concrete base and the pitch trays and will leave more grass on the pitch which will make it batting-friendly.

There have been five centuries scored in three MCG matches this Sheffield Shield season. Marcus Harris, who made his debut in the Adelaide Test, smashed an unbeaten 250 that sealed his Test call-up.

“He (Page) knows what he’s got to do now leading into the Test match. It’s going to be a good one and I think the boys should excited and there’s definitely going to be a result wicket I think, going by what’s happened in the first couple of Shield games this season.” 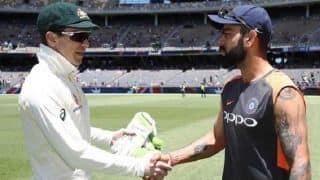