In the bowler rankings, Lyon and Hazlewood moved up to No 7 and No 9 respectively.

Virat Kohli has held onto the No 1 position in the ICC Test batsmen rankings after scoring a superb 123 in India s first innings of the recent Perth Test, gaining 14 ratings points to reach 934 and extend the gap over second-placed Kane Williamson to 19.

New Zealand skipper Williamson scored a very fast 91 against Sri Lanka in Wellington to reach a personal best of 915 ratings points, the joint-25th highest of all time. His team-mate Tom Latham has gained 15 places to move to a career-best 22nd positing after scoring a monumental unbeaten 264 at the Basin Reserve, the second-highest score by a New Zealand opener in Tests.

ALSO READ: Watch out for India in the remaining two Tests: Sourav Ganguly

Sri Lanka emerged with a draw in Wellington thanks to an epic fourth-wicket stand of 274 not out between centurions Kusal Mendis and Angelo Matthews – and rain on day five – and that pushed the two batsmen to 18th and 43rd place respectively. Mathews top-scored for Sri Lanka in their first innings, with 83 and gained eight slots.

The Australia opener Usman Khawaja moved up one slot to 12th position after scoring a second-innings 72 off 213 balls.

In the ICC Test bowler rankings, the Australian pair of Nathan Lyon and Josh Hazlewood has moved up to No 7 and No 9 respectively after inspiring their side to an impressive victory over India in Perth. Lyon claimed 5/67 and 3/39 across two innings at Optus Stadium, to be named Man of the Match and thus climbed seven spots. Four wickets for Hazlewood moved him up two places.

For India, Jasprit Bumrah’s five wickets in the second Test saw him gain five places to No.28, while Mohammed Shami‘s career-best 6/56 moved him up two slots to 21st. In doing so, Shami surpassed the mark of most wickets by an Indian bowler in away Tests during a calendar year, which was Anil Kumble s record of 41 wickets set in 2006.

New Zealand quick Tim Southee, who bagged eight wickets in Wellington, rose by four places to 11th spot. Having arrived at Basin Reserve with a Test best of 3/24, Southee got his name on the honours board by claiming 5/67 off 25 overs in Sri Lanka’s first innings. 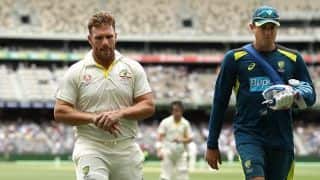