Bowling spearheads Starc, Hazlewood and Cummins are missing after being ordered to rest.

Veterans Peter Siddle, Nathan Lyon and Usman Khawaja were Friday recalled to a revamped Australian one-day squad to play India with an eye on the 2019 ICC Cricket World Cup in England later this year.

Bowling spearheads Mitch Starc, Josh Hazlewood and Pat Cummins are missing after being ordered to rest and prepare for two upcoming Tests against Sri Lanka.

National selector Trevor Hohns said that after Australia lost to South Africa 2-1 at the start of the summer, a change was needed to turn things around.

“With this in mind and the World Cup looming, we’ve selected players we feel provide us with the flexibility to play a variety of roles at different stages of a match,” he said. “The upcoming three-match series against India and the ODI tours of India and the UAE are important windows to put this into practice and to build a squad to help defend our World Cup title.”

Seamer Siddle’s return was a surprise. He played his last one-day international in November 2010, but gets another chance with the country’s top fast bowlers unavailable. He will lead the attack alongside Jhye Richardson, Jason Behrendorff, and Billy Stanlake.

“It’s wonderful to have Peter back in the squad for the first time since 2010,” said Hohns. “His white-ball cricket has improved considerably the older he has got, and his selection is great reward for his professionalism and strong leadership qualities.”

Khawaja returns after an almost two-year exile while Lyon replaces Agar after being overlooked for the recent South Africa series. Test players Mitch Marsh and Peter Handscomb were also included, with Aaron Finch the captain.

“With a focus on improving our ability to post competitive totals we’ve recalled Usman Khawaja, Peter Handscomb and Mitch Marsh to the squad,” said Hohns. “Usman is a batsman we know can put vital runs on the board at the top of the order, and Peter is not only a fine player of spin bowling, he’s also a batsman we know can hold an innings together while keeping the scoreboard ticking over. Mitch gives us another all-round option with his ability with both bat and ball.”

Australia play three ODIs against India, starting in Sydney on January 12 before moving to Adelaide and Melbourne. 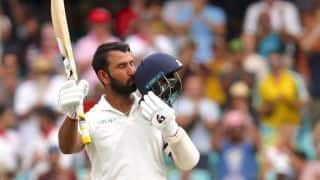 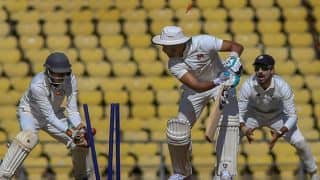 Eliminated Mumbai to be without Tare, Iyer for Chhattisgarh tie