While he felt the bowling left a bit to be desired, Finch was happy with the batting.

Australia‘s captain Aaron Finch was a pleased man as he fronted up for the post-match presentation on Saturday, following the home team’s 34-run victory over India at the SCG which gave them their first positive result of 2019.

Australia’s fortunes nosedived in 2018, from the time the ball-tampering scandal broke. They won just two of 13 ODIs while slipping to No 6 after losing an unprecedented seven ODIs in a row. Having lost the Tests to India, they are now 1-0 in the best-of-three series.

After posting 288 via fifties to Usman Khawaja, Shaun Marsh and Peter Handscomb, Australia rocked India at 4/3 inside four overs and barring one stand between Rohit Sharma and MS Dhoni, they did not allow the second-ranked team to forge partnerships. (FULL SCORECARD: INDIA vs AUSTRALIA, 1st ODI)

“Very pleased with the performance. I think the way they rebuilt, Rohit and MS, we knew they will take it deep and we managed to pick up the wickets at the right time,” said Finch. “I thought we got a par total, the partnership between Usman Khawaja and Shaun Marsh was very good in the middle overs and Peter played a gem. In the middle period we played really well. We didn’t score a lot of runs in the middle overs but we saved the wickets for the final overs. We have powers hitters like Maxi [Glenn Maxwell] and [Marcus] Stoinis at number 6 and 7.” (ALSO READ: Not pleased with the way we played: Virat Kohli)

Leading the way with the ball were Jhye Richardson with 4/26 and Jason Behrendorff, on ODI debut, with the wickets of Shikhar Dhawan first ball and Dhoni for 51.

“Jhye and Jason are full of confidence, they have great skill sets and both have a good future ahead of them. We can always improve, our execution with the ball was at times off. It will be a good series,” said Finch. 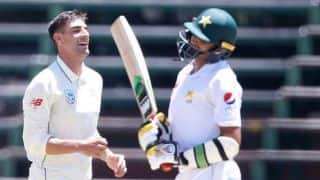 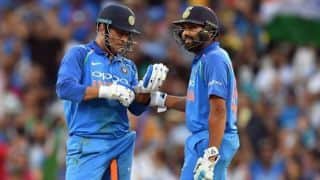 I would be happy if MS Dhoni bats at No. 4: Rohit Sharma