Immediately after the national anthems of both teams were completed in the series opener at Vizag on Sunday, players observed a two-minute silence

Visakhapatnam: In a moving gesture, Virat Kohli-led Indian team wore black armbands to mourn the death of the over 40 CRPF personnel killed in the Pulwama terrorist attacks in the Jammu and Kashmir region last week in the Twenty20 Internationals series opener against Australia in Visakhapatnam on Sunday.

Immediately after the national anthems of both teams were completed in the series opener at Vizag on Sunday, players observed a two-minute silence to pay their respects to the Indian soldiers who lost their lives in the terrible attack. Chants of Bharat Mata ki Jai reverberated all across the stadium in Vizag. (ALSO READ: From List A debut to receiving India cap, Mayank Markande’s phenomenal rise continues)

The talk surrounding the Pulwama attacks has spilled over to the cricket field as well with many former and current cricketers voicing out that India should boycott their ICC World Cup 2019 with arch-rivals Pakistan on June 16 at Old Trafford, Manchester.

The debate has split the cricket fraternity wide open with some, including former India captain Sunil Gavaskar and icon Sachin Tendulkar, saying that they would hate to lose two points to Pakistan. (ALSO READ: Australia elect to field, Peter Handscomb, Mayank Markande to debut)

Tendulkar wrote on Twitter that while it would be painful to lose potential points by not playing Pakistan this summer, he would support the decision of the BCCI.

“Our sincere condolences to the families of the soldiers who lost their lives. The Indian team is really shocked and sad about what happened,” skipper Virat Kohli had expressed his condolences on the eve of the game. 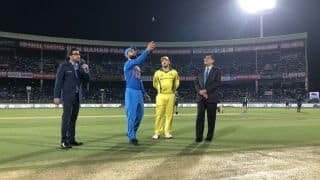