The series against Australia will be India s last international assignment before they head to England for the ICC World Cup 2019.

Australia s limited-overs captain Aaron Finch won the toss and elected to bowl in the series opening Twenty20 International against India at Visakhapatnam on Sunday.

The series against Australia will be India s last international assignment before they head to England for the ICC World Cup 2019.

Punjab legspinner Mayank Markande, who snapped 13 wickets for India A in the recent series against England Lions, will make his debut as he replaces Tamil Nadu allrounder Vijay Shankar. (ALSO READ: From List A debut to India cap: Mayank Markande’s phenomenal rise)

Back among runs after spending some time in the India A camp under the watchful eyes of Rahul Dravid, KL Rahul makes a comeback to replace the rested Shikhar Dhawan, while Umesh Yadav will fill in the shoes of Bhuvneshwar Kumar, who has been rested for the Twenty20 series and the first two OODIs.

We would have wanted to bowl first too. It looks like a good pitch to bat on. We are not concerned about batting first, Kohli said at the toss. (ALSO READ: No hundred yet, but with twin eighties KL Rahul makes progress with India A)

Back after a good break, the Indian captain is raring to go. I was switched off and didn’t watch much cricket during my off period. I wanted to get away from everything and refresh myself. I am ready to go now, he explained.

Giving a slight hint into the changes made to the squad, Kohli said that the think tank wants to give maximum time to the World Cup-bound team.

There are people who might be the potential contender for our World Cup squad and we want to give them more game time. KL Rahul will open the innings, Shikhar Dhawan has been rested. Umesh Yadav in place for Bhuvi.

Australia too have a debutante in Peter Handscomb, who will also keep wickets. It looks like a really nice wicket and I don’t think it is going to change much. Peter Handscomb will make his debut and he will keep wickets too. D Arcy Short will open the innings for us, Finch said at the toss. 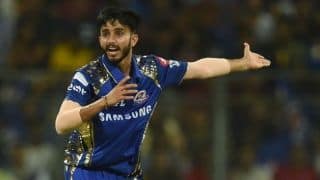 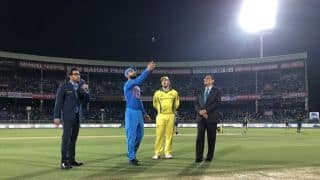