Lyon, who has 19 wickets in 18 ODIs, hopes to team up with Adam Zampa in England.

Nathan Lyon, the Australia offspinner, believes that two spinners in each team’s XI during the 2019 ICC Cricket World Cup is a distinct possibility as he chases a ticket to this summer’s 50-overs pinnacle event in England.

Lyon is Australia’s most successful finger-spinner in Tests with 343 wickets, but his ODI career has been limited to just 18 appearances.

The 31-year-old was in January recalled to Australia’s revamped ODI squad and this year has added three caps to his tally, from which he has manage only one wicket. Having claimed 1/42 against India in Nagpur on Tuesday, Lyon said he was hopeful of getting a shot at the World Cup.

“You always want to play in the big tournaments and I’ve never had the opportunity to play in a World Cup. It’s definitely on my bucket list,” he told reporters in Ranchi, where the third ODI will be played on Friday. “I do believe two spinners in a squad is going to play a massive role, especially in the UK. I dare say nearly every side in the World Cup will be playing two spinners.” (READ: Lehmann backs struggling Finch for World Cup)

Among the teams who have regularly fielded two spinners in their ODI XIs are India, who are reliant on Kuldeep Yadav and Yuzvendra Chahal; current world No 1 England, who have Adil Rashid and Moeen Ali; Sri Lanka with Akila Dananjaya, Lakshan Sandakan and Dhananjaya de Silva as back-up; and Pakistan, who during their run to the 2017 ICC Champions Trophy title in England played Imad Wasim and Shadab Khan. (READ: Australia need victory to avoid series loss to India)

Lyon, who has 19 wickets in ODIs at an average of 42.78 with a very healthy economy rate of 4.86, was upbeat about teaming up with Adam Zampa in the World Cup.

“I’m very confident with where my skill level is at. I know if I get the opportunity, I’m confident I can get the job done for Australia,” he said. “We’ve got three more ODIs here, then five in Dubai. There’s going to be a great opportunity for players to put their hand up.” 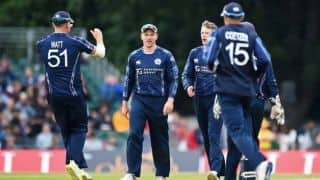