Australia must win all three games to win the series, which would be their first in over two years.

India need a win to wrap up their fourth straight bilateral ODI series – and fifth competition in a row if you count the Asia Cup – while Australia are in a must-win situation to avoid a seventh consecutive series defeat.

Since losing to England 1-2 last summer, India won the Asia Cup and then beat West Indies, Australia and New Zealand to underline their tag of No 2 team in ODIs. Australia, in stark contrast, have not won an ODI series since January 2017. Their ranking of sixth – achieved in November – is their lowest in three decades and defeat to India in Ranchi on Friday will further add to their problems. (READ: MS Dhoni eyes major landmark in international cricket)

To claim the series, Aaron Finch’s team has to win all three remaining ODIs, a feat no Australian side has achieved in India since 2003, the year Ricky Ponting’s World Cup winners lifted the TVS Cup. Under Justin Langer, Australia lost 1-2 to South Africa and 1-2 to India, so there are clear signs of improvement. Now they need to find a way to close out situations of dominance. (READ: Feeling empty after Nagpur defeat: Marcus Stoinis)

India have been put under the pump by Australia’s bowlers, slipping to 99/4 in Hyderabad and 75/3 in Nagpur, but each time found saviours. They will hope that Shikhar Dhawan, Rohit Sharma and Ambati Rayudu – should he play – get some runs to their name. (READ: The numbers that highlight Virat Kohli’s genius)

What: India vs Australia, 3rd ODI

Rayudu has endured two poor games this series, and further failures will give rise to questions over his role t No 4 for the World Cup. India also need to test out KL Rahul and Rishabh Pant, so changes could be made. Bhuvneshwar Kumar is back in the squad, but probably won’t slot in until the fourth game.

The visitors fielded just two specialist fast bowlers in Nagpur, adding Nathan Lyon and getting ten overs out of Glenn Maxwell. They may have to replicate that, given the nature of the Ranchi surface.

The JSCA Stadium in Ranchi has assisted spin more than bounce. India once fielded just one specialist pace bowler in an ODI there, while playing three spinners and Stuart Binny the medium-paced allrounder. The highest score at the ground is 295/8 made by Australia in a washed out game. The forecast is for a sunny day.

Dhoni needs 33 runs to complete 17,000 international runs, which will make him the sixth Indian to do so.

“We’ve had our opportunities to win both games and it hasn’t happened in India. We know how close the two teams are. Take your opportunities, put them under pressure and hopefully we win the next three.” – Marcus Stoinis 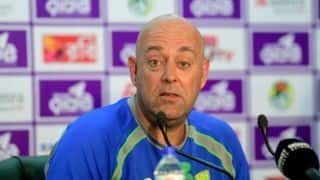