After their first ODI series win since 2017 and first on the Indian soil since 2009, Australia skipper Aaron-Finch lauded his team.

Trailing 0-2 in the series after the first two games, the visitors went on to win the next three ODIs to win the five-match ODI series 3-2 to become the first side to beat India after being 0-2 down in the series. (ALSO READ: Australia clinch historic series with 35-run win over India)

Usman Khawaja struck his second hundred of the series and Adam Zampa scalped three wicket as Finch and co completed the series win, beating the Virat Kohli-led Indian side by 35 runs in New Delhi on Wednesday at the Feroz Shah Kotla. (ALSO READ: It is going to be tough to pick the World Cup squad: Justin Langer after India series win)

It’s unbelievable. The resilience and the fight that we showed was incredible. We’ve had our backs against the wall for a while now, but I’m really proud of the group for coming back, said Finch.

It’s important to have a balanced side. We need a good balance of attack and defence. You need good batsmanship on these wickets against these really talented guys like Kuldeep (Yadav), (Yuzvendra) Chahal and Jaddu (Ravindra Jadeja), added Finch. (ALSO READ: Series win in India gives us great confidence going into the World Cup: Peter Handscomb)

Finch also said that while the people had written this team off, the team has what it takes to win the 2019 ICC Cricket World Cup and win the series. The right-hander, who showed signs of returning to a form with the bat, highlighted the need to sticking to the gameplan. (ALSO READ: No confusion about the World Cup squad, just need to discuss about one slot: Virat Kohli)

Like I said, people have written us off for quite a while now, but the team that we have can win us the series, and they can win us the World Cup. It’s about believing in ourselves and sticking to our gameplan. It was a great series all round even though India beat us resoundingly in Nagpur, concluded Finch. 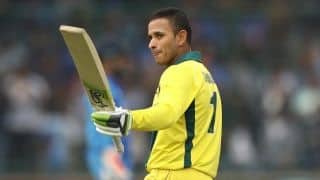 I just played depending on the conditions: Man of the Series Usman Khawaja