Batting legend Sunil Gavaskar has lavished praises on India allrounder Vijay Shankar‘s impressive performance in the second ODI against Australia in Nagpur. (READ: Milestones loom for Kohli, Dhoni and others)

After an enterprising innings of 41-ball 46 that helped India to a decent total, Shankar defended 11 runs in the final over of Australia innings, picking two wickets in three deliveries in thrilling eight-run win. (READ: Australia need victory to avoid series loss)

Gavaskar feels the faith put in by India captain Virat Kohli will go a long way in shaping Shankar’s international career. “Shankar was given the huge task of bowling the final over of the innings and defending 11 runs when in his only previous over he had conceded 13,” Gavaskar wrote in his column for The Times of India on Friday. “That leap of faith by the Indian skipper could well be the making of Shankar, who can only go higher after the outing in Nagpur.”

Shankar made his ODI debut on the tour of Australia in January this year and has since played six ODIs scoring 91 runs and taking two wickets.

India were in a tricky spot in Nagpur at 75/3 losing openers Rohit Sharma and Shikhar Dhawan early. Ambati Rayudu also got the start but failed to build on it meaning Shankar was in the middle much earlier than he would have anticipated.

Together with Kohli, he bailed India out of the spot hitting five fours and a six in a brisk knock. Gavaskar reckons the Tamil Nadu cricketer could be the batting allrounder India need.

“India needs batting allrounders and with the Rayudu experiment as a bowler having come a cropper, Shankar could be that option that gives the side an extra bowler without adversely affecting its batting strength,” he suggested. 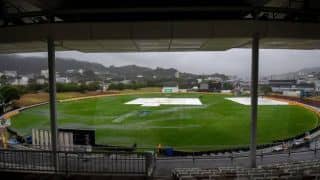