India captain Virat Kohli won the toss and elected to bat in the high-stakes third Test against Australia in Melbourne on Wednesday.

India captain Virat Kohli won the toss and elected to bat in the high-stakes third Test against Australia in Melbourne on Wednesday. The four-Test series is tied 1-1 after India won the opening clash in Adelaide by 31 runs and Australia drew level with a 146-run victory in Perth.

India, the world’s top-ranked nation, are gunning for a first-ever series win in Down Under and have dropped misfiring openers Murali Vijay and KL Rahul. In their place, debutant Mayank Agarwal will open the batting with Hanuma Vihari, who has been bumped up the order.

First-choice spinner Ravichandran Ashwin remains injured with left-arm finger-spinner Ravindra Jadeja brought into the side as part of a four-man attack.

“This pitch looks like a nice surface but it looks bit dry. So it is going to be slower and slower and tougher to bat on the third and fourth day,” said Kohli. “We are taking this Test as the last Test of this tour. We want to be at our best for this match.”

Australia’s only change from Perth is the recall of all-rounder Mitchell Marsh at the expense of middle-order batsman Peter Handscomb who has been struggling for runs.

“I wasn’t too sure what to do so I am happy to be bowling,” said skipper Tim Paine, adding that the win in Perth had given them confidence. “We have a pretty inexperienced group so a win certainly helps.” 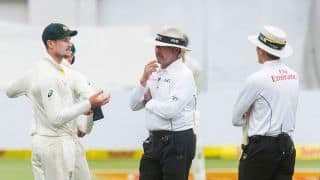