The spectators at the Melbourne Cricket Ground Bay 13 stand have been warned to cease racially motivated taunts aimed at the Indian players and spectators during the Boxing Day Test at the MCG. Several complaints were made regarding the taunts in the first two days of the Test match.

According to a report in ESPNCricinfo, footage of a specific chant “show us your visa” was handed over to Cricket Australia and the they in turn passed it on to Victoria Police and stadium management.

“Victoria Police and stadium security are monitoring the behaviour of the crowd in that section of the stadium,” a CA spokesperson said, “and have had several discussions with those fans in that bay to remind them about appropriate crowd behaviour, as per venue entry terms and conditions.”

Indian skipper Virat Kohli was also at the receiving end of a derogatory chant, but Kohli managed to keep his cool and came up with a quirky a response.

India captain @imVkohli was greeted with the chant of “#Kohli is a wanker” by the MCG crowd.

On day three, despite securing a whopping lead of 292 after Jasprit Bumrah took 6/33 to bowl out Australia for 151 in 66.5 overs on day three at the MCG, Virat Kohli chose not to enforce the follow-on on Friday. 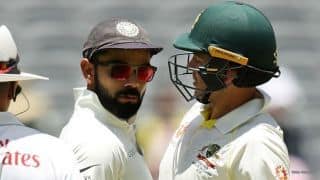 Australian Cricketers’ Association expresses concerns over use of stump mics