Manjrekar believes Agarwal should replace Rahul and open the innings with Vijay in the Boxing Day Test at the Melbourne Cricket Ground.

As India s openers continue to struggle in Tests overseas, former batsman Sanjay Manjrekar feels including Mayank Agarwal could be a shot in the arm for the visitors. The opening combination of Murali Vijay and KL Rahul have combined to score 97 runs in eight innings and with neither batsmen looking comfortable in providing India a rock-solid start at the top, Manjrekar believes Agarwal should replace Rahul and open the innings with Vijay in the Boxing Day Test at the Melbourne Cricket Ground.

Agarwal was in line to be called up as opener given that he was part of India s Test squad against West Indies last month and has been a key member of India A s success this year. Most recently, Agarwal scored 65, 42 and 42 for India A in two four-day fixtures in New Zealand.

“I will personally still go (open) with Mayank Agarwal and Murali Vijay,” Manjrekar told IndiaTV. “Even if you play Mayank Agarwal, we should not have high expectations because it is extremely tough for an Indian batsman to straight away go into a Test match on an Australian pitch, especially at the top of the order, where the Kookaburra ball does a lot.”

He finished the 2017-18 domestic season with a record-breaking 2,141 runs to push his case for India selection, which saw him top the Ranji Trophy run chart with 1160 at 105.45, including three hundreds a best of 304 not out and two fifties. As part of the India A tour of England, Agarwal was his team s leading run-getter with 287 from four one-day games as they won a tri-series with England A and West Indies A. In the four-day matches, he made 68 against West Indies A and 1 versus England A.

Besides Agarwal, another change Manjrekar would like to see India imply is promoting Hanuma Vihari further up the order. Vihari, who made his debut against England earlier this year scored a half-century in his first innings, although India lost the Test at the Oval to finish 1-4 in the series. Vihari, brought in for Rohit Sharma in Perth Test, looked composed in both innings and got starts with scores of 20 and 28.

Currently batting at 6, Manjrekar reckons Vihari has what it takes to be included in India s top order based on his technical skills. “These are Australian conditions. Hanuma Vihari, when you see him bat, you get an impression that this is a guy, who has a good technique. His scoring shots are straight in front of the wicket and he seems calm temperamentally,” Manjrekar pointed out.

“He is clearly a batsman who has the game to bat at (number) one, two and three. So, the sense is there having Vihari bat at the top of the order. So if India does not want to take that risk and put undue pressure on Agarwal, then Vihari is an option (to open the innings).” 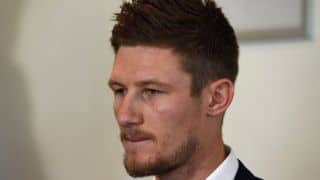