Paine desperately looked for positives Monday after his side's calamitous 2-1 Test series loss to India, but struggled to find many

While they won in Perth, Australia were comprehensively outplayed the rest of the series, losing in Adelaide and Melbourne before being spared by the rain in a one-sided Sydney finale. (ALSO READ: Best Indian team I ve been part of says Man of the Series Cheteshwar Pujara)

Their squad for two Tests against Sri Lanka is due to be announced on Wednesday, with the matches Australia’s last red-ball cricket before the Ashes tour to England later in the year. (ALSO READ: India win first Test series in Australia following SCG wash-out)

And there will be some nervous players waiting to find out their fate.

“We’re really disappointed. We know we had some guys missing but we honestly felt coming into this series that in Australia, we could beat India,” said Paine, who has won only one of the seven Tests he has been in charge. (ALSO READ: India report card: Cheteshwar Pujara, Jasprit Bumrah orchestrate landmark Test series win)

“But throughout the series, more often than not when those big moments came up, Virat (Kohli) scored a century or (Cheteshwar) Pujara scored one, or (Jasprit) Bumrah bowled a great spell and got them through those moments. (ALSO READ: Five statements that backfired)

“Their best players stood up in the big moments.”

The same can’t be said for Australia, who capitulated at crucial times.

Starc was criticised for not being at his best, while none of the batsmen reached three figures, making it the hosts’ first four-Test home series without scoring a century in their history.

It exposed the gaping hole left by the banned Steve Smith and David Warner, who are due back from 12-month ball-tampering bans in late March.

Asked how the batsmen will be able to handle an English attack on home territory if they were not able to deal with India’s quicks on docile pitches in Melbourne and Sydney, Paine said: “We’ll have conversations in the next day or two”.

But he also suggested that not much will be changing.

“I have faith that the guys we have around the team are the right guys — (we) just have to keep putting some faith and trust in them,” he said.

“They are learning on the job a bit, but I think we’ll get there.

“We can’t help that we haven’t got Mike Husseys or Michael Bevans,” he added, referring to the two explosive former players. “We’ve got what we’ve got and the playing group is trying as hard as we can to get better.”

Paine pinpointed the opening Adelaide Test as one that got away and could have changed their fortunes. India won it on the fifth day by just 31 runs.

“We honestly feel that we let that Test match slip. We thought we had a number of opportunities in that Test to get ahead of the game, and when those key moments came up, India outplayed us,” he said.

“We can learn a lot from the way they went about it, and we’ll make sure we do.” 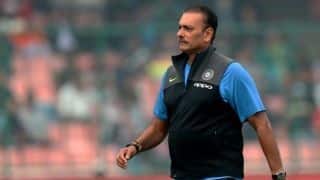 This win is as big as the 1983 World Cup win: Ravi Shastri